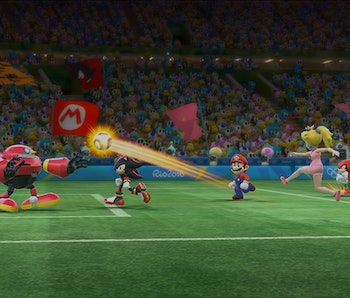 In case you weren’t aware, Nintendo has somewhat quietly been pumping out officially licensed games for the Olympics starring both Mario and Sonic since 2008. Well, Sega’s been developing them, and Nintendo’s been publishing them, but you get the idea. But which ones are actually worth your time? Which ones are even remotely good?

Who knows. There is perhaps nobody on this planet who has played through all five and invested enough time into this line of thought who isn’t already obsessed with Sonic. Which is why, rather than pretend to have given them careful consideration, I’ve ranked all of the Mario and Sonic at the Olympics games based solely on their cover art.*

*Home console versions only. The portable covers have been ignored because this is my list and I’ll do what I want, thank you very much.

Where to even begin with this mess of a design? The obvious focus being the two characters is fine and expected, and it looks like they’re meant to be racing? Without context clues, it looks like they’re just sharing a ribbon to share a ribbon. And the sections spread through showing various activities? Just makes the whole thing feel busy — and that’s despite extra points for Waluigi and Shadow the Hedgehog front and center.

4. Mario & Sonic at the Olympic Games

The Beijing 2008 Olympics were a simpler time for both Mario and Sonic. The cover for this particular installment is far less busy than any other version, but it also comes across as a bit… empty. A cloud-filled blue sky fills the middle, adding a sense of nothingness to the whole composition.

On the other hand, the symmetrical nature of the art — with Sonic and Mario lifting feet on the opposite side, stripe down the middle, and mirrored stadium in the background — adds a bit of gravitas. Equal sides in competition against the other. Isn’t that what the Olympics are supposed to be about?

Ah, now this is how you do a cover with a bunch of characters on it! It’s like Super Smash Bros. but about the Olympics. There’s a perfect storm of factors at work here to make the Rio 2016 art firmly in the middle of the pack — good use of space, multiple characters, and the symmetrical nature of the art. But Mario and Sonic are also holding two different kinds of balls, but are facing off? That’s a bit confusing, and earns the effort a few demerits which keep it out of the top of the pack.

This is basically the perfect cover. Sochi 2014’s single flaw here is the somewhat bizarre linguistic construction (see that added “.ru” just so you know it was Russia) compared to the rest of the series. There’s the huge emptiness of the sky to contend with again, but it adds a certain feeling of size given the skiing nature of both Mario and Sonic. “They are on a mountain,” the cover says, “with mountain air and fresh snow. Also, Knuckles and Peach are here too.”

This is perhaps the pinnacle of Mario and Sonic covers. There’s still the mirrored design of the original Beijing 2008 art, but slight differences between the two major characters. Sonic, as you can see, has a snowboard — making him one of the best versions of Sonic — while Mario is skiing. Their poses are also distinct but similar, and the better defined crowd around the ring in the background is a solid touch.