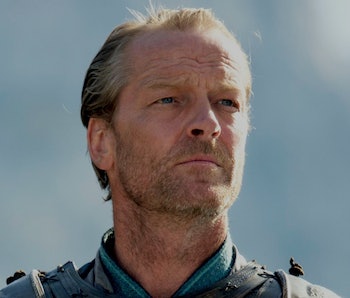 Are we supposed to be satisfied with how Game of Thrones left it with Jorah this season?

No, probably not, but we are also probably not supposed to care. Game of Thrones has too many characters, lands, hunks, and sociopaths to deal with by now. To some extent, it assumes favorites and has to leave the rest to smolder away, or be cut out entirely. It gives us, for instance, lots of Daenrys “HRC Stand-in #1” Targaryen— more than is even necessary — and perhaps not enough Benjen Stark; oh well, it is an election year, after all. It also seems unlikely that we’ll get all the bases covered any better in the upcoming, even-shorter seasons.

Perhaps I like Jorah Mormont because he is some kind of textbook antihero, and I like old, stodgy, un-woke film noirs and Technicolor Westerns from the ‘40s and 50s. As Jorah sets off on his journey to, vaguely, go cure himself — at Dany’s behest — I can’t help but think of John Wayne as Ethan Edwards in John Fords classic Western The Searchers: a broken, haggard-as-hell, middle-aged man devoted, tirelessly, to a self-sacrificing and largely futile quest.

Like the sourer, prickly Edwards, Jorah does modest good — advancing Dany’s movement — but plenty of pieces of himself come off in the process. In the course of his obsessive, tireless, stoic crusade, he loses track of everything else except his devotion. In his ultimate interaction with Daenyrs, he hardly knows how to act, or what to say.

There is, on top of it, the constant threat of Jorah’s descent into leprous stone-zombie dementia. Grayscale is a bitch, we’re told. Iain Glen plays his scenes intensely, even though showrunners/dank bros Benioff and Weiss hardly give him any lines anymore, and you wonder how quickly the stone bug is advancing. Apparently, it’s slowly enough that it makes any sense for Daenyrs to think he can still journey off to find a cure.

But part of the fun of watching Jorah this season — to the few of us left who give even the vaguest shit about him — is marveling, epsiode after episode, at the fact that he is still alive. He’s been set up for death and martyrdom so many times it’s unbelievable, from being banished by Dany the first time to undergoing hell in gladiator-slave captivity. But the fact that he got through an entire season after we discovered that he’d gotten Grayscaled last season… it makes no sense. It almost seems silly.

Or it’s a daring choice. Which makes me wonder about Jorah, more than it makes any sense for me to. I think the show Game of Thrones is as a whole, really stupid now — and maybe it always has been — so I really have to wonder: Do Benioff and Weiss have something special in mind for Jorah, or did they just forget to find a way to get rid of him? Will he have an actual plot line next season, or will we simply be gifted with a quick cutaway in an early episode to watch his grisly fate play out? Is Jorah still being alive for a symbol of how random and fan-service-compromised Game of Thrones will become, or does he have some last quixotic, heroic move left in him?

You may think no one cares about Jorah Mormont, young Benoiff and Weiss, but I do. I like his craggy face. I like his scratchy, toadish voice and his Edinburgh accent. I like that he is this dated, Eastwood-ianarchetype lodged awkwardly in the middle of a show that is trying to stay premium-cable-modern, twist-filled, and occasionally, sociopolitically enlightened or #relevant. He’s so boilerplate-virtuous and almost sanitized that he’s risked being untold levels of boring since the beginning of the show.

Eventually, Glen made this unique and perhaps unenviable position a badge of honor. He delivers an evocative performance with a mythological quality that feels like it is operating in a weird, separate universe from the people with whom he is sharing scenes. Smartly, Benioff and Weiss milked this contrast for humor during Jorah’s fateful expedition with Tyrion to find Dany.

But why? Why do any of it? What is Jorah around? Was the choice ever really thought out?

By point of contrast, let me be the first or millionth to say: Fuck Daario, and his scene of goodbye with Daenrys in the Season 6 finale. We all get it: Michel Huisman is going to go have a movie career, and he wants to properly and pompously bid us farewell before he does, even though he was hardly a character. His exit was treated with respect, and Jorah was shooed off, in a pathetically sympathetic moment, to an uncertain future.

To me, whether there is anything planned for Jorah in future episodes will make it clarify how good Benioff and Weiss’s narrative instincts are, now that they only get George R.R. on occasional conference calls or whatever. It’s the mark of how much of a pile of Reddit-friendly garbage HBO is content with letting Game of Thrones become on their watch while the ratings are through the roof.

What I’m trying to say is: Jorah is, in some ways, everything that’s potentially good and terrible in Game of Thrones, distilled. I hope he’s okay, wherever he is.