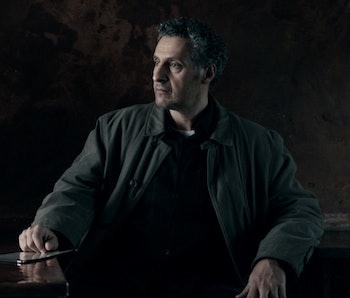 “Excuse me? Professional counsel? He had John Stone.” Alison Crowe (Glenne Headly) spouts this zinger off in court, very much aware that John Stone (John Turturro) himself, whom she was calling a shitty lawyer, was sitting in the room. Though the judge admonishes her for it, the spectators chuckle ominously; her slight is basically accepted and agreed with all around.

Stone just lets the comment wash over him, almost smirking ironically himself. Later, we see him trudge gloomily out of the precinct after talking with a client who is not even trying to pretend he didn’t do his crime — in the holding cell where he first met Naz (Riz Ahmed) in the pilot of The Night Of. This kind of client is the norm for Stone, no doubt — business as usual.

The more shocking business as usual? Probably Stone sleeping with one of the prostitutes he defends. We’ve learned from Crowe’s rhetoric that sex workers are one of the go-to groups of people John “No Fee ‘Til You’re Free” Stone defends. In a way, the unexpected scene — in which Turturro constantly reaches for the lights to hide his damaged skin — is another evocation of his normal rituals in this episode, which finds John skulking at the sidelines, professionally impotent, mourning the loss of his would-be career case.

“Heard about your kid. Gift from the gods,” says a regular at the dive Stone frequents, not knowing Naz had been pulled by Stone. His grimace and half-nod is one of the saddest facial expressions we’ve yet seen on the show. Suddenly, Stone is fully rounded: a man who felt a sense of newfound purpose in his life for a definitive moment, before it was wrenched rudely away from him.

In jail, Naz is finding a new sense of purpose, discovering how to fit in and assert himself in a new environment. Outside of making his own choice to join Freddy’s cabal, he also realizes that he’s not comfortable with admitting his guilt in any way. Stone doesn’t know it, but the confidence has in part stemmed from his own words to Naz — the atmosphere of transparency their correspondence set up.

Unaware, Stone ends the episode doing what little bit of good he can in the Andrea Cornish murder saga: He calls the pound to check on her cat. It’s a pathetic but revelatory gesture. It’s the conscience that makes him not only an empathetic co-protagonist, but good at his job. He does not let details go, even if it makes absolutely no sense — or isn’t even in his own best interest — to pursue them.

He can’t keep away from an animal, which he is no way logically responsible for — that makes him unwell to be around. On top of a chronic skin disorder which makes him effectively a social leper, he is flirting with taking back the cat, who would cause an allergic reaction on top of this.

Why does John Stone feel the need to take on these responsibilities? We see him perform actions — and make subtle facial expression — that illustrate empathy and care. But he never says the words — we never get the explanation outlined. This is textbook crime noir stuff — the chronically lonely, self-sacrificing detective. It’s a weird, misanthropic kind of stock Christ figure, but an effective one.

The Night Of’s co-creator and writer Richard Price knows how to carry this trope off better than almost anyone working in TV — or literature, for that matter. Would you expect anything less from one of the guys who wrote Jimmy McNulty?