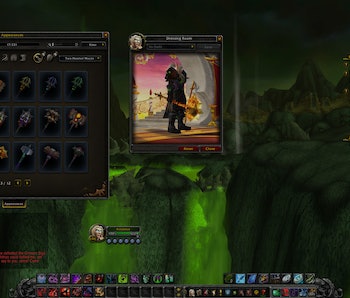 Patch 7.0.3 has arrived for World of Warcraft, introducing a bevy of new features to prepare players for the upcoming release of the Legion expansion. Among them is the updated transmogrification feature, which allows players to collect visual looks for their characters simply by picking up gear from the game.

The update means collected pieces of gear no longer have to be stored in your bank or your void bank, so players can build an entire collection of visual appearances without having to worry about them taking up valuable inventory space. Say goodbye to holding all that junk just to look good.

In the new appearances tab, you’ll see hundreds of possible appearances for each item slot you can collect and customize your character with — which means you’ve got a lot of work cut out for you. But, if you’re looking for a decent place to start, here’s a few of the most iconic and best-looking armor sets to look for while you wait for the launch of Legion.

The Judgment armor set was originally introduced back in vanilla World of Warcraft alongside the release of patch 1.6, which brought Blackwing Lair into the game. An eight-piece set, the Judgment armor was first utilized for so-called “damage per second” (DPS) roles due to its hefty bonuses on judgment damage for Paladins. But as time went on and Blizzard continued to change the way Paladins functioned in-game, this set quickly became more of a healing one. The Judgment set is still regarded as one of the best-looking armor sets in the game, which makes sense, given that it was designed to be an Inquisitor-like outfit for offensive Paladins who laid waste to the enemies of the light.

Unfortunately the Judgement set is also one of the most difficult sets to farm for your appearance collection. All of the pieces drop in both Blackwing Lair and Molten core raids with a relatively low drop rate, which you’ll have one shot at every week. Every piece of the set can be obtained from Blackwing Lair except for the legs, which drop from Ragnaros in Molten Core. If the yellow and red color scheme isn’t to your liking, you can also go for the purple and silver color scheme version of the set found within heroic dungeons from The Burning Crusade expansion. Both are equally difficult to farm though, with fairly low drop percentages on most of the pieces.

Originally introduced during The Burning Crusade expansion, the Vestments of Absolution were released alongside patch 2.1, which brought the Black Temple raid into the game. When it was first available, the Vestments of Absolution was a five-piece set for healing priests that was later expanded into an eight-piece set with the release of patch 2.4. Featuring a dark blue and silver color scheme, chained shoulders, and ominous hood — it’s a great addition to anyone’s wardrobe.

The Vestments of Absolution still drop from the various bosses scattered throughout Black Temple and the Sunwell raid instances, which you’ll have to farm tokens from weekly to exchange for the entire set. These tokens can be turned into Tydormu in the Caverns of Time and Theremis on the Isle of Quel’Danas in exchange for an armor piece with which the token corresponds.

The Conqueror’s Darkruned Plate set was first introduced during Wraith of the Lich King with patch 3.1, which brought Ulduar into the mix. Made up of five pieces, the Darkruned Plate was the first time Death Knights got their hands on a max-level set that felt appropriate to their class legend. For the first time since their starting zone, they looked and felt like an actual Death Knight; covered in dark runes, skulls, and horns.

The Conqueror’s Darkruned Plate set is located within Ulduar’s 25-man difficulty out in Northrend. There you’ll find token drops from the bosses, which can be traded for the armor pieces in Dalaran at the smithy. You’ll also be able to obtain a matching set of boots from General Vezax on 25-man, and there are plenty of belts to complete the set scattered about. It’s also worth noting that Ulduar does have a look-alike set for plate users who are not Death Knights with a red-and-steel color scheme. Those pieces drop off of the various bosses in the 25-man version of the raid.

Much like the Darkruned Plate, the Voidheart Raiment is one of the armor sets that truly brought forth the class fantasy of the Warlock. First introduced when The Burning Crusade launched, the Voidheart Raiment was a set that featured bonuses which boosted spell damage and surrounded the player with the twisting animations of the void. The hood even went so far as to hide your character’s face behind a mirage of void energy, only showing two glowing eyes and a small nose — perfect for extra intimidation or looking similar to your voidwalker.

Like the other tier 4 sets within the game, the Voidheart Raiment is spread across plenty of Burning Crusade raids and obtained by exchanging tokens you’ll receive from boss drops. Tokens for both the helm and gloves drop in Karazhan, while the shoulders and leg tokens drop in Gruul’s Lair. You’ll find the chest token in Magtheridon’s Lair, although it may take a little longer to farm due to a lower drop rate. Each of these tokens can then be brought to the Aldor or Scryer tier vendors in Shattrath City to exchange for your pieces.