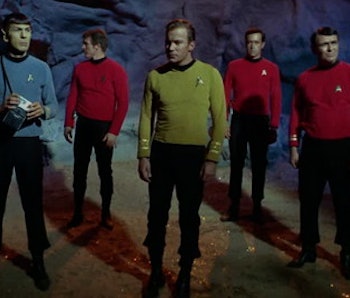 So far, Bryan Fuller has kept a lid on his upcoming Star Trek series, expected next year from CBS. We know it will bridge the timeline between The Original Series and Next Generation. He’s promised to push the original spirit of diversity and progressive issues, but beyond that, we don’t know what tone this new series is going to adapt.

Fuller is known for creating a distinct and definitive visual style, from the impossibly bright Pushing Daisies to the dark sheen of Hannibal; so we expect that he will anchor his Star Trek with visual hints that pay homage to the previous iterations. That still leaves Fuller plenty of room to take the show in any direction he wants – whether he goes darker with cerebral commentary or maintains a sunny optimism.

No matter what tone the new series chooses, there are countless ways it can give a subtle nod to The Original Series while still maintaining its own storylines. The narrative style of bouncing from planet to kooky planet is perfect for Fuller’s visual world-building genius, and it would be cool to revisit old locations in a brand new light. Here are 10 recognizable planets from The Original Series alone, that the Star Trek could touch down on again.

This planet was the site of the scrapped pilot that was later reworked into The Menagerie. It’s home to a race of aliens who can produce elaborate illusions in an attempt to manipulate their human visitors. It’s a concept that could be worked in any direction tonally; we could even imagine them being more surrealist like the hallucination work in Hannibal. Star Trek wouldn’t need to rehash the old plot, just set it’s new story in a world where everything is not as it seems.

A Piece of the Action is a pretty ridiculous episode, and features an Iotia populated by ‘20s cosplayers. But the idea of planet home to an impressionable a society that was disproportionately and humorously influenced by a random discarded book is a good one if the new Star Trek chooses to stay goofy. It doesn’t need to be as sitcom-y as A Piece of the Action, but it would be interesting to see the new crew brush with a similar society, although perhaps they would be influenced by a different book, to more appropriately reflect our times.

Ardana and the cloud city

Even though Empire Strikes Back eclipsed The Cloud Minders as our reference point for a mining city in the clouds, floating shit is always worth a revisit for the wow factor. Fuller, the look master, would definitely put a fantastic new shine on the place.

Janus VI, the home of the Horta

The Horta, as seen in The Devil in the Dark, could easily be as goofy as it originally was – or actually scary. These sentient blobs of silicon are peaceful, but lethal, which means Janus VI is a planet full of deadly lifeforms that can’t easily be detected. A planet full of seemingly toxic rock is the perfect stakes raiser for any story, and the nod will be appreciated.

The site of Kirk’s iconic encounter with the Gorn was never named, but it has some curious properties. Seemingly desolate, it was actually rich with resources that Kirk was able to use to fight and defend himself. It would be a useful setting for any survival plot.

This was the name of the planet populated by androids in I, Mudd. Star Trek has always been partial to aliens, but every space show needs some androids.

In The Way to Eden, the original crew takes a bunch of space hippies to the planet Eden, which looks like a paradise but is actually deadly. Like the Horta, the constant danger of Eden makes it a great setting for any adventure.

This is one of several planets that was home to a hostile race of aliens, but the Capellans were more than just primitive caricatures. They also have a great look that deserves a Fuller update, if the show goes for a colorful, playful vibe.

The Original Series made a few time traveling visits to Earth. Again, it should probably avoid traveling to the past, but a glimpse of contemporary Earth would serve to situate the new Star Trek in time, and also make a statement about the future that awaits our planet.