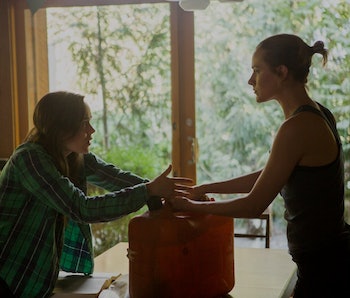 There’s no clear explanation as to what caused the continent-wide blackout in Patricia Rozema’s new apocalyptic drama, Into the Forest, but the film suggests that the loss of technology is the most catastrophic result – and perhaps the most probable apocalypse for us.

In the film’s opening, two sisters, Eva (Evan Rachel Wood) and Nell (Ellen Page) only have a few gallons of fuel left, but they sacrifice some to their generator so they can have one more blissful night with the lights on. They use the microwave for the first time in months to pop popcorn and watch old family films on the couch. After months of saving every drop for an emergency and making the drive into town, they give up their careful conserving to remember the way their lives used to be.

The film, which will be released by A24 and DirecTV on July 29, follows the girls as they adapt to society crumbling around them. We check in with Nell and Eva every few months as they struggle to keep each other alive with limited resources and cope without their father in a secluded home. Into the Forest is meant to be set about five years in the future, and besides a few thinner, transparent TV screens, things look pretty much the same. The message is clear: we need to figure out who we are without technology, or losing it will mean losing our humanity.

Woven throughout the story are references to a “fugue state,” or a temporary amnesia in which a person has full awareness, but forgets key parts of her identity. Nell remembers this encyclopedic factoid from the time when the lights were on, and she compares it to the waiting game the girls play while living out in the woods. Without electricity, for instance, Eva has no music for her dance rehearsals and Nell can’t use her computer to study for her college entrance exam or communicate with the outside world. When Nell initially refuses to let Eva use their limited fuel supply for a brief moment of music, Eva shuts herself off from the only person she has left and spirals into a depression.

In our increasingly hyperconnected society — where nearly two-thirds of American adults use social networking sites and 24 percent of millennials say technology is what makes their generation unique — a complete loss of technology is unthinkable. In a world where it’s a challenge to live without a smartphone for a week, the idea that technology is not a guarantee and our systems are more fragile than we think is terrifying. While Into the Forest doesn’t have any destructive alien invasions or terrorist attacks and only hints at the mass chaos outside Nell and Eva’s home, we see the personal apocalypse of two sisters. And it doesn’t feel wildly improbable.

While the visceral, intimate connection between the sisters grows stronger, outsiders are suddenly untrustworthy and violent. When Nell is given the opportunity to leave her home in hopes of finding civilization, she ultimately chooses to stay isolated from other people. As technology becomes more central to our relationships, what would happen if that connection was suddenly severed?

When Nell and Eva finally admit to themselves that the lights are never coming back on, that they can’t keep hoping for the life they used to have, they burn it all down — photos, memories, everything — and walk away. Though the film never advises its audience to implement any particular plan, it uses the last shot to make this absence of technology freeing.

More like this
Entertainment
3 hours ago
25 years ago, Nic Cage made his most explosive sci-fi movie ever — it was almost even better
By Jake Kleinman
Culture
6.28.2022 9:00 AM
8 sensational sci-fi shows and movies coming to HBO Max in July 2022
By Robin Bea
Culture
6.25.2022 10:30 AM
You need to watch the most inventive Bruce Willis time-travel movie before it leaves Netflix this week
By Eric Francisco
Related Tags
Share: