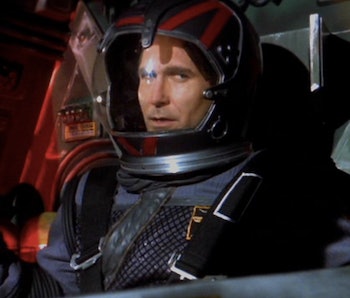 US Department of Energy via youtube
W. Harry Fortuna
July 25, 2016

If J-Bone, played nobly by Ice-T in 90’s sci-fi classic Johnny Mnemonic, is still looking for some hot futuristic equipment, he should probably head straight to Princeton.

The video below highlights a real piece of serious scientific equipment, but add in a cheesy 2D laser scanning the bacta-tank-looking device from the basement to the penthouse, and it looks like a set-piece from the original Men in Black. It would fit right into the scene where Tommy Lee Jones’ Kay is giving Will Smith’s character Jay a tour of the MIB headquarters. Behind one of the doors they open there are a bunch of insect-looking thingies sitting around arguing in some alien tongue, and they’re sucking the liquid out of this thing through crazy straws.

What the video, released by the U.S. Department of Energy on Monday, is really showcasing is a new type of centrifuge in development by the Princeton Plasma Physics Lab, or PPPL. The narrator explains that the device effectively increases the gravity forces on its contents by using two separate cylinders, an outer and an inner. These cylinders rotate independently and create a fluid flow that’s fancily referred to as annular Couette flow. What this means is that this centrifuge creates more force on its contents and can separate nuclear waste faster and more efficiently than standard rigid body centrifuges that rotate all as one piece.

So maybe Ice-T’s J-Bone, not a nuclear physicist, wouldn’t have had this in his hideout, but the MIB aliens sure could have. Who knows what those little buggers are into, maybe sucking up nuclear waste is their version of a keg stand.