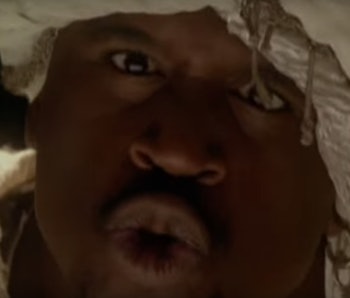 Is there anything as beautiful as Kazaam’s grin? Sure, probably parts of Greenland. But not much. Say what you will about Shaq’s 1996 role as a rapping genie/well-swaddled spirit who speaks almost exclusively in vaguely rhythmic knee-jerk rhymes not even Lil Wayne would deign to attempt — the basketball star’s unwieldy performance does provide laugh-out-loud moments. Shaq’s sense of how to perform comedy is, by any technical standard, incorrect: stilted, ill-timed, unrelated to the scene going on around him.

Yet his performance is still, on its 20th birthday, charming in its seat-of-the-pants spirit – and truly unforgettable. Watching Shaq wend his troubled way through his best-known feature film, toppling everything in his path, is a bizarre pleasure which hardly leaves you time to wonder how the hell this thing got to theaters.

The answer to that question feels less important than parsing the details of the finished product. The movie, a combination-mess of incongruous plot lines grounded by a computerized Shaq sliding down bedroom walls and riding flaming bikes around grimy alleyways in lower Manhattan, is enough to grapple with on its own.

But people underestimate how many executives will sign off on once a huge star is attached. Kazaam became, essentially, a competitor to the “Michael Jordan/Bugs Bunny project” that Warner Brothers was working on, according to the film’s now-disgraced director Paul Michael Glaser. Writers Christian Ford and Roger Soffer worked on the 1990 Teenage Mutant Ninja Turtles movie, so that gives you an idea of the kind of crypto-fantasy urban mise-en-scènes these guys could willingly get down with.

Thus, we are presented with the Neverending Story-reminiscent story of Max, a city kid resorting to Bart Simpson-y cut-up antics to retreat from his fractured family life. One day, he hides from his bullies in an old lamp store, and finds not a lamp — for some reason — but an enchanted, bejeweled boombox. It takes a while for its tenant, Kazaam, to illustrate to Max he is actually magical — that is, to get his groove back by making the sky rain fast food. But finally, they’re able to get into trying to solve Max’s true problem: reuniting and reconciling with his estranged father.

The only roadblock: said father is a huge asshole, a crooked A&R man who makes money off of selling pirated tapes on the black market. That whole operation, which takes place in a seedy warehouse and involves a Da Brat cameo, is pretty hard to parse.

Also, Kazaam is pretty in and out of the picture when it comes Max, despite his responsibility to grant him those proverbial three wishes. Kazaam hates his job — he wants to be a djinn, a free agent who can control destinies, time, and fall in love without having to answer to the desires of snot-nosed kids like Max. As a djinn, Kazaam could pursue his budding music career in earnest, who is based in rapping (mostly the words “I am Kazaam”) over vaguely Egyptian, definitely racist beats about his own exploits as a centuries-old mystical being. That is, he raps about his life, because Max points out to him that “you gotta have something to rap about. you gotta have something to say.” Max, apparently, is like one of those “real hip hop” heads that think all rap should sound like Nas. The two rap battle the inspirational song — you may know it — “We Genie,” which is about what it sounds like it is, ending up with both ‘zaam and Max in sultan getups.

No one in this movie is a good person. Kazaam almost lets Max (the “little fart,” as he likes to call him) die a couple times, because the genie is busy trying to hook up with one of Mike’s dad’s employees. What cockblocks kids can be! The Rocky and Bullwinkle villains in the film are Middle-Eastern, night-club-owning thugs who are after Kazaam’s “sultan’s gold” (don’t ask). Before the racism can suffocate not just the film, but the whole world, Kazaam turns the gang boss into a basketball and dunks him away into the garbage disposal of eternity.

Twenty years on — in a very different and significantly more humorless film industry — Kazaam feels almost breathtakingly weird and, despite itself, hilarious. It’s an unruly canvas of ideas united behind the concept that one of the characters would be Shaquille O’Neal as a genie. Act structure doesn’t exist; human relationships don’t need to be built, just referred to, even in films that are meant to be about him. Kazaam is as confusing as the pre-adolescent identity crisis it attempts to dramatize, but it remains an important cultural snapshot of the eccentricity of its time — a reminder of one of the weird ways sports icons used to get their side money.