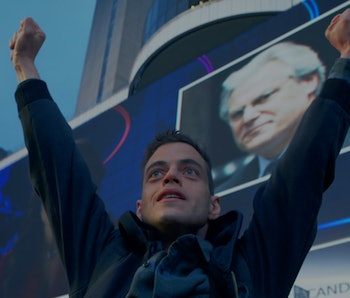 It was supposed to free us from the chains of late-stage capitalism, lift the burden of crushing debt from our backs, and set the struggling American worker free. The high-stakes hacking of E Corp brought the young revolutionaries in their faux-Guy Fawkes masks marching into the street, celebrating the seismic shock that seemed to be toppling the global financial elite.

The first season finale of Mr. Robot made it clear that fsociety’s encryption of E Corp’s customer data was supposed to trigger a full-blown populist revolution, even if it didn’t cure the multitude of deeper psychological issues experienced by its hacker-in-chief protagonist, Elliot (Rami Malek). But the two-part premiere of creator Sam Esmail’s hit show’s second season tells a different story about the fallout, eschewing the idealistic fantasy for the depressing reality.

The truth is, the hack mostly just fucked the very people it was intended to rescue.

Midway through the first half of the two-part premiere, a middle aged woman pleads with a teller at E Corp’s consumer bank. The woman was hoping to withdraw cash from her account at the devastated bank.

“I can’t say for sure that if you cancel, we can give you all your money,” the bank teller says, presumably for the 500th time that day. Angry and alarmed, the woman pleads for her savings. “I know what I have, I just want to cancel,” she says, begging for fairness from an institution that wouldn’t provide it even if it could.

The revolution is sputtering months after the hack, and the world is awash in uncertainty. But some parties have more to worry about than others. While E Corp’s logo was based on the insignia of Enron, the disgraced energy company whose implosion was one of the many stains on the first term of George W. Bush’s presidency, the fictional company’s fate has become more reminiscent of the many massive banks that nearly went bust during the financial crisis of 2007-2008.

Throughout the premiere episode, President Obama — thanks to some fancy editing and audio manipulation — reassures the nation that the government is working to catch those responsible for the hack, and to stabilize the economic system. What that means, in reality, is that E Corp will get some kind of bailout, as will the many other corporations and industries that have taken major hits as a result of the cyberattack. A CEO here or there may lose their job, but for the most part, these companies — run by the 1% of the 1% — are considered too big to fail.

Instead, it’s people like that woman at the bank, desperate to take out her relatively meager life savings, that get hurt the most in the fallout of the hack. Banks can skate by on reserve cash until they get a bailout; working people can’t do the same when it comes time to pay the rent. The recovery since 2008 is proof; the rich have gotten richer, even though it was their failings that triggered the economic disaster.

The conversation at the bank is a small moment in a complicated show, but it begs a massive question: Is there any true way to free those who lack a real safety net? Elliot and fsociety have a lofty and admirable goal, but playing on such a high level means that people down on the street wind up as collateral damage.