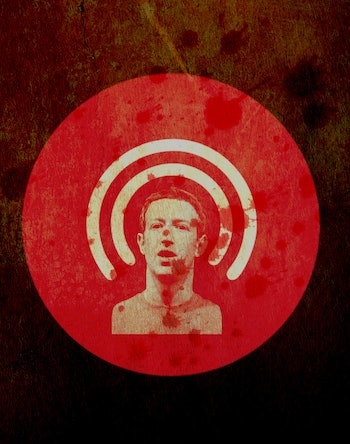 Facebook doesn’t want to be known as a media company. It’s a social network. It’s a platform with a “Newsfeed.” It’s even a gamechanger. But ever since Facebook began hosting Instant Articles and Facebook Live broadcasts, it has become increasingly difficult for Mark Zuckerberg to act as though he’s not soliciting dispatches from the field. And it got even harder last week when a Minnesota policeman killed Philando Castile at a routine traffic stop. Castile’s girlfriend, Diamond Reynolds, streamed the aftermath from the passenger seat on Facebook Live. That video — her boyfriend bleeding out; her daughter in the backseat — has been viewed almost six million times.

One hour after it was posted, Facebook removed the video — or, if you believe Facebook, a “technical glitch” led to the video’s removal. Not long thereafter, the video was back, sporting a warning message. When, the next night, a sniper killed five police officers in Dallas, attendees live-streamed the attack and the manhunt that ensued. Those videos are available.

Esther Enkin tells Inverse that all these Facebook streamers are “committing acts of journalism.” And she, of all people, would know: Enkin is the President of the Organization of News Ombudsmen and also the Canadian Broadcasting Corporation Ombudsman.

Ombudsmen serve as the liaison between organizations and the public. Enkin explains that public editors, who work for big-name newspapers, perform a similar duty — “everything from ensuring corrections are made to looking at bigger issues, and calling the newspaper to account.” Codes of conduct vary, but there are fundamental tenets, like truth and accuracy.

“Facebook is not the New York Times,” she says. “But, if it’s playing in this sandbox, there are certain fundamentals.”

Inverse asked her what a Facebook public editor would look like and how the creation of that role could benefit both the platform and its two billion users.

What led to media and broadcasting companies establishing these positions?

There are a bunch of different stories about how ombudsmanship came to be. It started, in modern times, at about the turn of the 20th century. One of the first was in Japan.

I think it was New York World, at one point, that had a corrections department that sort of morphed into this kind of thing. But in the seventies, it enjoyed a resurgence. There were various scandals around plagiarized or made up stories that hit the Times and the Post. There was a perception of the news media as arrogant, paternalistic, and unresponsive. The news organizations that created positions of public editors and ombudsmen really reaped the benefit.

It’s interesting, now: a lot of the growth is in emerging democracies — in Latin America, in parts of Africa. If you’ve been repressed for a long time, the media tends to be ham-fisted and very yellow. Having an ombudsman is a dedication: ‘We believe in a set of standards we’re going to live by, and we will be accountable for them.’ It reinforces democratic principles.

Would you say that Facebook is a media company?

I don’t know if a label’s important. It’s committing acts of journalism when it’s live-streaming events.

The industry went through this Oh God, who’s a journalist — how do we define a journalist? thing. At this point, you almost can’t. That is one of the beautiful things that’s happened, but, like everything, it’s a two-edged sword. The fact that it’s so open, so democratic, and so available to anyone with a phone … I’ve been in this business thirty years. It’s mind-boggling how it’s changed. I just came into television when it was going over to video: You used to have to mail cans of film! It’s astonishing, and it’s wonderful, and it’s rich, but it has a downside.

What rules, if any, do we make: That’s the next evolution. You may not be a journalist, but if you happen to be watching what happened in Dallas happen and you take out your phone, you are committing an act of journalism. It’s unfettered, unmitigated, it doesn’t have the context — that comes later. But it is an act of journalism, for sure.

Can Facebook be held accountable for its content in the same way that traditional news outlets can?

Well, they’re providing a platform. I don’t see how they could not be. The law is a bit fuzzy in this way. But, if you’re providing this platform, then I think it’s disingenuous to say, ‘Well, what can we do?’ I also sympathize with ‘What do we do? How do we moderate in any way?’ But again, I think it comes back to the fundamental of ‘Let’s declare what we are and what you can expect when you go here.’

So would you say that Facebook ought to hire an ombudsperson or public editor?

I would say that it would make them accountable in a way that lives up to the spirit of openness and transparency.

I don’t know that I could really answer that in detail, except to say that it would first require Facebook to say, ‘Here are our rules of engagement. Here’s what we will allow on Live. Here’s what we won’t.’ Then, the role would be the same as any other public editor anywhere. In the context of this organization, are they living up to their stated standards? It’s not Mark Zuckerberg having to go out there and say, ‘Gee, this is tough.’

I’m sure a lot of people, in the spirit of Facebook, would say that it’s nannyism, and it is what it is, and it should just be left open. If that’s the case, then that’s the case, and they don’t need a public editor because there are no standards.

The really nice thing about public editors is that there’s an important educational function — both externally and within an organization. I know that the journalists in my organization read what I write and they think about it. The same thing with the public. It’s really, really important that people understand what they’re looking at, what a particular site stands for, and the organization’s level of accountability. That may be the biggest advantage to Facebook: ‘Here’s what we are, here’s what we’re trying to accomplish, here’s what we can do for you, and here’s what we feel our responsibilities are. And our users have responsibilities, too.’ It’s a dialogue.

It’s not for me to say what’s right for Facebook Live. They’ve got to sort that out, I guess with their stakeholders, which is the public. All of this creates a distorted image of the world, in some ways, [and one can ask] how much responsibility Facebook has for that. At some point, as people get more and more of their information from Facebook, and other digital sources, someone’s gotta take responsibility. Truth has to matter.

If you were Facebook’s ombudsperson or public editor, what would you in the wake of the Philando Castile shooting video? And I know that’s a difficult question.

It is a difficult question. It’s live-streamed, right? At the very least, I’d say slap a warning on as quickly as you can. And then it’s a kind of caveat emptor. I’m very torn about the use of this kind of stuff. Even in the context of CBC’s digital site, I know that there is a lot of discussion around ‘Do we use this?’ The context in which it’s used in a news organization is: ‘Is it important proof of what happened? Does it explain what happened?’ And, you know, it does. But there are always huge warnings. You have a choice.

With Facebook Live, you don’t. At some point, if it’s being monitored, there’s the ability to add that. Or to ask users to moderate.

What more would you add about Facebook and its duty to the public?

We can’t change the environment. Live-streaming of this stuff is going to happen more and more. This is the new world we live in, and, in some ways, it forces us to confront the level of violence and the issues. It’s right in our face. As a journalist, and as a believer in freedom of expression, it’s hard to say there should be any limits — but there has to be some context around it. And people have a right to know what they’re getting, and how they’re going to get it.