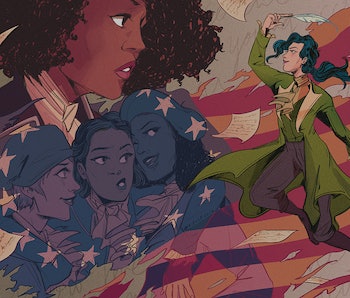 Arielle Jovellanos isn’t afraid to be a little self-indulgent. She attributes her obsession with fictional characters and fantasy worlds to getting her first major job out of Parsons School of Design, finding her niche as an illustrator, and getting to meet the cast of Hamilton.

Jovellanos, a comic artist, illustrator, and proud theater nerd from New York, also loves collaborative work. She rallied 44 other artists to create #Ham4Pamphlet, a stunning collection of illustrations for each of the 46 songs from Hamilton, and corralled even more artists for two volumes of “Ladies of Literature,” an illustrative anthology dedicated to often overlooked (but beloved) female characters.

She spoke with Inverse about subtle storytelling, turning the Avengers into “bitchy” high schoolers, and the gaps in representation that fangirling can fill in.

Could you tell me a little bit about your take on Civil War and why you decided to flip the script on an action movie?

I think there’s just something about taking a really crazy, bombastic superhero movie and it’s just such a fun mental exercise I think to just sort of figure out how that would adapt into a different setting…[Collaborator Janet Sung and I] are very much on the same page on things that we like to draw, and I think we just both were excited by the idea of drawing them in fun clothes and sort of like bitchy drama high school facial expressions and everyone throwing shade everywhere.

We tried to pack so many little what-if’s in every detail, like Wanda and Vision staring at each other from across the cafeteria, and just Peter Parker coming in from the back like a loser freshman, which is honestly exactly what happened in the movie.

How did you start finding your niche and developing your style as an illustrator?

I feel like it’s really important to indulge in what you like and figure out what you like to draw because the way that I had gotten hired for my first big gig with Fresh Romance was that literally I had just graduated college and I was like what am I doing with all this time, I don’t know what to draw. And what I wound up drawing was outfits of the day. I had a whole succession of just really self-indulgent drawings of better-looking versions of me wearing clothes.

My editor for Fresh Romance had seen those on my blog and she had instantly thought that I would be a perfect fit for a romance comic. Sometimes online I’ll hear a lot of flak from people being like, “Oh, just another pretty lady drawing.” But it’s like, if that’s what you like to draw, then follow your bliss and you’ll get hired for the stuff that you’re already drawing.

Speaking of self-indulgence, what’s your experience been like with the fangirl community?

I’ve definitely said this before, that I learned to draw completely from being hyper-obsessed with characters, and I feel like that’s a completely valid way to do it. There are so many artists that you see now working professionally who had their start that way and who probably still indulge in and maybe they’re just more quiet about it.

I have heard the argument that fan art, fan fiction, things like that which are primarily attributed to women or female-identifying people, is sort of like women using the fan work to fill in the gaps of canon storytelling that they don’t see. Something like gender-bending a character in fan art or interpreting a character as queer. In that way, I feel like fandoms and fandom activities fill in the much needed gap.

Do you feel like women are still underrepresented in the illustration and comic book worlds? Or in the stories that are being told?

It’s funny because I know that maybe mainstream there aren’t a lot of women writers getting their shots, but it’s almost like all about who you surround yourself with. I feel like on social media I’m constantly surrounded by inspiring female creators. I’m also consuming their work too, so in this bubble that I’m in, I’ll see all of these stories. But then it sort of sucks when you realize like in the real world there aren’t a lot of female directors of mainstream movies.

It’s like, we exist, and I sort of sometimes resent it when media will act like someone came from nowhere…We’ve existed and actually a lot of us have been ready, it’s just that the same opportunities haven’t been granted. And that sucks, but I think it’s getting better.

How did you go about organizing the 46 artists that created #Ham4Pamphlet?

I only had around two months [before attending the show]. In my mind I was like maybe I could make them a book? Because I had experience printing things before, I’d organized a few other art book projects…It wasn’t super hard to get a lot of people on board and I just had the idea that in the limited amount of time we have, probably the easiest way to delve this out would be for everyone to draw one song. And that’s what happened.

I was really overwhelmed with how on board people were with that idea and the work that they produced and the fact that they were doing this for free. I think that’s honestly a testament to how much that cast recording means to so many people. And I feel like that’s sort of what I wanted to show the cast.

What projects are you working on now?

Currently I’m working on a project with Stela Comics with the writer Jeremy Lambert. It’s basically a Victorian horror comic, which is something that I haven’t been able to do yet. I sort of always get hired for high school stories and things like that. So I really enjoy the opportunity to stretch my creative muscles a bit and work with horror.