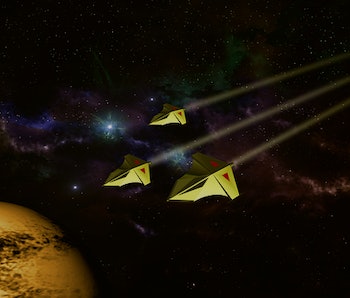 On July 9, we might have had an alien invasion.

NASA’s live-stream footage of the International Space Station was interrupted by a tiny gray speck. The object is fuzzy and comes in and out of focus, but it’s unquestionably there.

And then NASA shuts the feed down. This obviously means one thing, and one thing only: ALIENS.

Youtuber Streetcap1 called our collective attention on this conspiracy, though he (and NASA) point to the obvious explanations of meteors or asteroids or another seemingly innocent piece of space debris just floating around Earth’s atmosphere. But some outlets aren’t buying it, suggesting that NASA was part of an alien cover-up.

While conspiracy theorists analyzed every second of that video, Jake Swearingen at PopularMechanics actually called NASA to ask what’s up, and got ahold of a NASA spokesperson. Here’s Swearingen:

“We have never seen UFOs in the popular sense,” said a NASA spokesperson, after a long, deep sigh. “The feed in question is the High Definition Earth Viewing experiment. Anytime the ISS has a signal, that feed is sending down video.”

As for the stream shutting off when the object gets really close to Earth — well, the NASA spokesperson claims that there’s no conspiracy to hide something from the public. The unnamed source told Swearingen it’s just a loss in reception.

But when the High Definition Earth Viewing system loses signal, the video stream goes dark. “The feed is not switched manually,” said the spokesperson. “It’s all done automatically. There’s nobody at a control board. We used a space-based data relay network. It gives us a very good coverage area, but you do lose signal occasionally—anywhere from a couple of seconds to a couple of minutes. It varies from day to day.”

Conspiracy theorists are obviously going to town with this.

Some suggest NASA has done this before.

Some people are ready to accept our alien overlords.

But others think that humans can take on whatever aliens are coming.

And others have just given up on 2016 entirely — even this Fox News analyst.

More like this
Science
6.30.2022 10:00 AM
Behold! Curiosity discovers Martian rocks contain an essential ingredient of life
By Allison Parshall
Science
7 hours ago
25 years ago, NASA landed its first rover on Mars — and catalyzed the search for life
By Doris Elín Urrutia
Science
1 hour ago
NASA just built the best map of Mars to date using 51,000 images
By Evan Gough and Universe Today
Related Tags
Share: