Portugal came out on top during Sunday night’s 2016 European Championship Final. The match was headed toward being decided by another dreaded penalty kick shootout before Portugal’s Eder managed to laser the ball into the bottom left corner of France’s net at the 109th minute. Without star player Cristiano Ronaldo, the country managed to outlast France and be anointed the best team in Europe.

But this game didn’t afford viewers the opportunity to watch one of soccer’s most spellbinding spectacles: free kicks that seem to defy the laws of physics. No worries, though: The rest of the tournament certainly had a record number of these beauties (Four, all in the group stage). There was Bale of Wales vs. Slovakia and vs. England, Dier of England vs. Russia, and Dzsudzsák of Hungary vs. Portgual. And in the Premier League, West Ham United’s Dimitri Payet was this year’s master of the free kick: 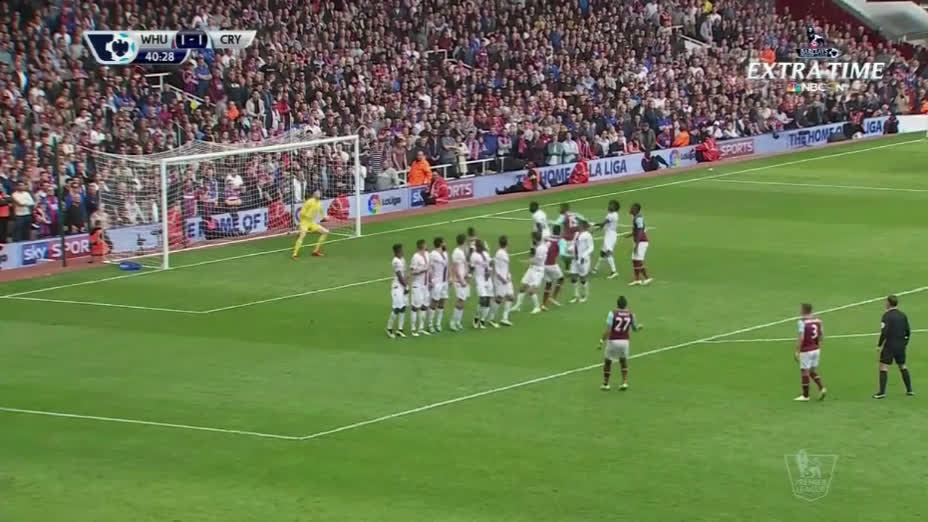 For the uninitiated, a free kick is a way to restart play after foul is called by the referee. Free kicks can be direct (in which a goal may be scored directly from the kick) or indirect (where the ball must be passed before an attempt to score can be made).

(And if you’re a real noob when it comes to soccer, let me first clarify that free kicks are distinct from penalty kicks, in which a foul occurs within the penalty box by the defending team, and the offensive team has a chance to score without interference from any players except the defending goalkeeper.)

A free kick occurs wherever the foul was committed. Things get interesting when a foul is committed by a member of the defending team in close proximity to their own goal — giving the offense a chance to directly score.

There are basically three broad techniques to score through a penalty kick (assuming you aren’t planning to pass to a teammate or lob the ball in towards a region from which other offensive members have a better chance to score). Your first strategy could be to go with brute force and just try to force the ball in directly with a powerful kick. If you’re savvy, you could use some technique to curl the ball around any obstacles using the inside or outside of your foot. And if you really have some skills, you can spin that ball and make it zoom through the air unpredictably.

It’s that last method thats especially interesting. Opponents need to stay 10 yards away from the ball and cannot move closer until the ball is in play. Sometimes, the opposing team gathers up most or all of its players to form a sort of human wall in order block a direct hit — forcing the kicker to resort to the second or third kicking options.

(At this point, it’s worth providing a quick primer on the physics of soccer. Don’t worry, this won’t be complicated.)

The first part has to do with Newton’s law of inertia, which states that any object at rest stays at rest, and any object in motion stays in motion unless another force acts upon it. When it comes to a free kick, the force that makes the ball move up and accelerate is a player’s foot, and the forces slowing the ball down as it moves through the air include drag and friction caused by wind and gravity.

Next up, the concept of momentum, which you might have once memorized as the velocity of an object times its mass. A player’s foot moving through the air can transfer momentum from itself to the ball it strikes. Making a ball move faster or higher through air requires more momentum, so a player needs to hit the ball with more force. If you’re trying to curl the ball up or put a spin on it (or both), you need to not only exert more force but also balance that with your wily foot technique. Tricky stuff.

That basic understanding of physics brings us to the big tamale: the Magnus effect, which explains how a player is able to bend a ball into the goal post during a free kick. When a soccer ball moves through the air, it’s the air that begins to take charge and moves — or in this case, curves — the ball to its own liking.

This imbalance means the pressure on the ball is greater at the top. The Magnus effect becomes more prominent and noticeable as the ball loses velocity — because at some point, the airflow that is moving against the spin is halted. The pressure imbalance is heightened and creates a force on the ball that acts both downward and against the side of the ball that used to create an opposing airflow. When a soccer player’s kick creates a counter-clockwise spin, the Magnus force acts left on the ball, causing the ball to curve left — and vice-versa.

Because the Magnus effect increases as the velocity decreases, you notice the curve in the ball happening much more rapidly as the ball begins to make its way back down towards the ground. The curve on the ball gets harder and harder during flight, fooling the goalkeeper and other nearby defensive players from correctly tracking it as it moves down. If you apply just the right amount of force that ensures the ball will make its way downward into the net in time, you’ll produce a free kick that seems to have a life and mind of its own.

Behold one of the most famous instances of Magnus effect, in Brazilian player Roberto Carlos’ 1997 free kick against France.

It’s not easy to master something like this, but the result can be devastatingly gorgeous — and ridiculously physics-defying — during a free kick.