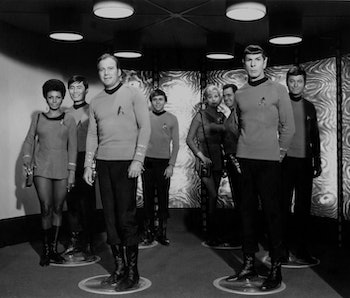 Some might say being a know-it-all is actually the defining characteristic of hardcore Star Trek fandom. And yet, because the world of Star Trek is almost as vast as space itself, there are so many facts, stories, and strange tidbits to boldly explore. With Star Trek Beyond coming at us at warp speed this Friday, and 2016 the 50th anniversary of the original show, it looks like we’re not going to stop talking about Star Trek for a long, long time. Still, throughout the long-life of the franchise, its history has also warped, just not in the way you might think. Pretty much everybody knows Captain Kirk never uttered the exact phrase “Beam me up, Scotty,” but what else? How many other Trek non-truths are you carrying around?

Some of what you think you might believe about Star Trek is actually incorrect. Here are seven oft-repeated Trek truisms that are in fact, totally, and fascinatingly, not true.

7. To Save the Original Star Trek, Gene Roddenberry Did Not Fight the Studio Until the Bitter End

If you know your Trek history, then you know the original show was canceled by NBC in 1969. Because of poor ratings, NBC had actually wanted to cancel the show in the second season, but was stopped by something very specific: a letter-writing campaign organized by Star Trek fans. “The truth is that NBC had no choice but to renew for a third season because of the letter writing campaign,” Edward Gross told Inverse.

Gross is the co-author of The Fifty-Year Mission, a two volume set of books which details the oral history of Star Trek from as many primary sources as possible. The book illuminates clearly, that though Star Trek was renewed for a third season, the show’s creator, Gene Roddenberry actually quit being a producer. Essentially, even though Trek stayed on the air for a third year, it was effecitvely dead, and Roddenberry had given up. “[NBC] didn’t like Roddenberry, and he didn’t like them,” Gross continued, “And they really did give the show the Friday night at 10 pm death-slot to ensure that the audience would be so low they could cancel it.”

During it’s final season, the show was being run by an outsider, Fred Freiberger, not Gene Roddenberry.

6. The Original Cast Did Not Get Rich When the Show Became Popular

You might figure the original cast of Star Trek started to make bank after the show blew-up in syndication in the early 1970’s. But they didn’t. Like not at all. In 1974, William Shatner was broke enough that he had to do ads for Promise Margarine, which is the kind of work he would have previously turned-down in the 1960’s.

In William Shatner’s recently published memoir Leonard: My Fifty-Year Friendship With a Remarkable Man he reveals that “We didn’t get paid residuals, it’s possible no show has been run more in syndication than the original series, but we didn’t receive a penny from that.” But, this state of destitution did not apply to Leonard Nimoy, who apparently, made more than every other member of the original cast and negotiated more savvy marketing rights for the use of his likeness. Eventually, all of the cast would figure out how to make more money in speaking appearances at conventions than they’d ever thought could be possible.

5. Martin Cooper, the Inventor of the Cellphone Was Not Inspired by Captain Kirks Communicator

You’ve heard this one a million times: the inventor of the cellphone (Martin Cooper) was inspired by the communicator featured on the classic Star Trek. In 2009, Martin Cooper even participated in a documentary called “How William Shatner Changed the World” in which he corroborated the notion that he was inspired to create the cell phone because of Star Trek. But then, as recently as 2015, in an interview with Scene World, Cooper recanted this notion. It wasn’t Star Trek that inspired the invention of a portable phone, but instead, Dick Tracy!

“I got so wrapped up in the glamour of making a movie, that I let them start that rumor,” Cooper said. He makes it clear that in all the years he’d worked for Motorola that there had always been an desire to make communication happen with a “handheld device,” and if there was any pop-culture inspiration for him, it wasn’t Star Trek but instead was “…maybe from Dick Tracy who many many years before [Star Trek] had a wrist radio.”

4. Star Trek Probably Did Not Have the First Interracial Kiss On TV

This is a big one! Because Star Trek is often touted for it’s wonderful racial diversity in a time when American TV was decidedly white-washed, many have often complimented the show as depicting the first interracial kiss. The episode was the fairly embarrassing third season effort “Plato’s Stepchildren,” and in it, Captain Kirk and Uhura are forced to kiss by some not-so-nice alien-gods. Not only is this kiss not sexy or romantic, it’s depicted as something they two of them are forced to do! Not exactly progress.

Still, was it technically the first interracial kiss on television? If you watch any special on the Star Trek the answer will be yes. But what about the Ricky kissing Lucy on I Love Lucy? Plus, two British productions totally beat Star Trek to this milestone; the 1962 production of You In a Small Corner and the 1964 broadcast of the soap opera Emergency Ward 10.

Sure, both of of those examples are not on American television, but I Love Lucy certainly was! Not to mention, Lucille Ball’s company, Desilu Studios, bankrolled Star Trek for its first two seasons!

3. The Success of Star Wars Was Not Directly Responsible for Star Trek: The Motion Picture

Here’s another one you hear all the time: there would have been another Star Trek TV show in 1979 and not a film, and that the only reason there was Star Trek: The Motion Picture is because the original 1977 Star Wars was successful. While this is a little bit true, there’s a wrinkle: plans to make a Star Trek movie stretch back before Star Wars was even a thing.

In an interview in The Fifty-Year Mission, one of the producers on Star Trek: The Motion Picture, Jon Povill says: “In 1975 Paramount expressed interest in developing a Star Trek film, so Gene [Roddenberry] moved back into his old offices on the lot.”

This early Roddenberry-penned story was called “The God Thing” and literally featured Captain Kirk duking it out with a faux-Jesus on the bridge. The project was eventually dropped, and then production of the series Star Trek: Phase II began. During the production of Star Trek: Phase II (in 1977) it was eventually decided the low-budget aspect of doing a series couldn’t compete with new science fiction like Star Wars but also Close Encounters. So, you can blame Spielberg, too!

While we definitely think of Captain Kirk’s tunic as being “command gold,” the fact is that the actual fabric used by original Star Trek costume designer William Ware Theiss was green and not the yellow-gold we think of. That’s right, decades before “the dress” blew up the internet’s conception of how people see clothing color, Star Trek was using a green shirt because on film, it would look gold.

The entire rundown of how and why this goes down is explained in detail by Anovos, the folks who manufactured the museum-quality replica of the famous uniform. One thing that gets crazy: even when you know certain versions of Kirk’s shirt are green: your eyes will still make you think it’s gold. Take that you blue/gold internet dress!

1. The United Federation of Planets Is Not a Utopia

Depending on who you talk too, the utopian ideals of the future of Star Trek are either a good thing, or terribly oppressive. In fiction and in political theory, the notion of a utopia are generally regarded negatively. Sometimes it seems a utopia is a parody created by an author to demonstrate a terrible idea for a society. An example of this would be the weird fake-paradise of the future world in H.G. Wells’s The Time Machine. Or maybe, the author of a utopia isn’t kidding, and the goody-two-shoes future is just an overly idealistic version of a rose-colored-glasses government, like, possibly the future imagined by Tomorrowland. Here, depending on the intent of the creator of the fictional utopia, it’s easy to see how the line between a utopia and a dystopia gets blurry.

But is the United Federation of Planet, the governing body that pervades most of Star Trek, actually a utopia?

“It’s a future that works,” Star Trek novelist Greg Cox told Inverse, “Where humanity has not destroyed itself but instead continues to evolve and improve and test itself. That being said, I do think that some folks confuse “optimistic” with “utopian” and sometimes get carried away with the idea that Trek always has to be bright and shiny and inspirational.”

Cox’s insights becomes even more true when one considers the radical political storylines in every single version of Star Trek. Specifically, the fact Earth is rarely depicted in Star Trek and when it is, it’s often because there’s some kind of corruption going on with Earth’s the government. Many, many fans will tell you that the optimistic vision of the future was what everyone loved about Star Trek. But if there weren’t something in conflict with that optimism, there wouldn’t be any stories to tell.

Star Trek isn’t a look-on-the-bright-side self-help course. It may have dared us to be better people, but it made those dares with exciting stories, not lecturing idealism. And that’s the real reason people love Star Trek: the stories and those conflicts are extremely compelling and infinitely, dynamically and perhaps, boldly, memorable.