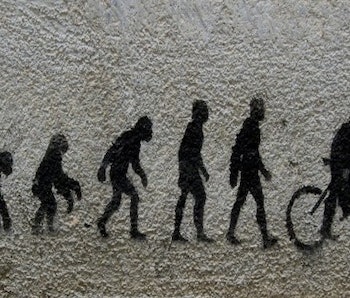 Homo sapiens made it this far because evolution — driven by natural selection — weeded out the people and their genes that couldn’t deal with the pressures of the world around them; think scarce food, unimpressed mates, and rampant disease.

But whether modern humans, coddled as we are by grocery stores and expensive healthcare, are still evolving is up for debate. In a new paper published Friday in Proceedings of the National Academy of Sciences, a Harvard University economist argues that natural selection is still driving human evolution — at least in a handful of Europeans living in America.

Evolution is a tricky thing to measure because there’s no real end goal. For his study, Jonathan Beauchamp, Ph.D., looked at a metric he calls relative lifetime reproductive success, or rLRS, which is essentially a measure of a person’s baby-making ability over the course of their lifetimes — the true measure of an individual’s biological success. Mining health and genomic data collected by the U.S. Health and Retirement Study (a nationally representative survey of 20,000 Americans over the age of 50), he looked at links between rLRS and the genes associated with certain traits, like body mass index, height, schizophrenia, age of first period in females, and, oddly, educational attainment. These traits, he writes, were selected because they’ve previously been shown to be subject to natural selection and plenty of data on them were available.

The general thinking in Beauchamp’s study is that having certain traits will make for better reproductive success. And, sure enough, he found some interesting correlations that suggested evolution was still ongoing: Natural selection has favored lower educational attainment over the past three generations, with a rate of selection of -1.5 months of education per generation. His analysis also shows a slightly weaker but still positive relationship between reproductive success and higher age of menarche. But Beauchamp’s research is severely limited in the fact that it focuses only on people born between 1931 and 1953, and only on Americans of European descent.

This raises some issues: Many of the Europeans that immigrated to America before that time period were turned away if they didn’t pass a health check; this artificial selection process could easily have confounded the study’s results. Also, American healthcare most likely made it easier for a lot of people in the study cohort to reproduce and survive longer than they did.

All together, the research does appear to show that, in this constrained population, natural selection is happening. But even Beauchamp admits that his work can’t be projected over more than one generation, and that his metrics — especially rLRS — may be more susceptible to cultural pressures, saying that the rate of evolution he determined “cannot account for more than a small fraction of the large changes that have occurred over the past few generations.”

More like this
Science
6.22.2022 8:26 PM
Yes, there are mites living on your face — and they can poop, a new study finds
By Allison Parshall
Science
7.2.2022 12:00 PM
Why is my cat scratching furniture? The answer might surprise you
By Tara Yarlagadda
Science
6.27.2022 11:00 AM
Letting your cat go outside could spread “life-threatening” parasites — new research
By Amy Wilson, Scott Wilson and The Conversation
Related Tags
Share: