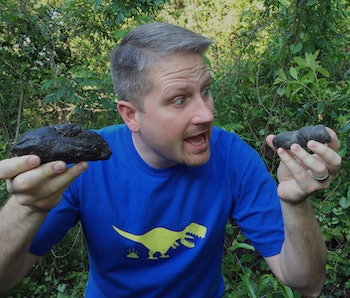 George Frandsen holds the Guinness World Record for the largest collection of fossilized poop, with more than 5,000 specimens.

Frandsen curates the Poozeum, an online repository for all things ancient poop. His collection is from all over the world, ranging in size from barely a speck to more than four pounds, from 400 million years old to a very young 10,000. “Much newer than that, they’re too fresh,” he tells Inverse. It’s good to have boundaries.

Frandsen has been collecting fossil turds, or coprolites, since he was in college. He had been instructed to gather a small fossil collection for a natural history class, and came across a specimen in a shop that caught his interest. “I had never heard of them. I had never seen one. I didn’t know they existed. So it just turned something on in me. It was just such a fascinating little nugget. It was funny, it was interesting — everything that 18-year-old guys love.”

Coprolites can tell us fabulous things about animals of ancient history — even dinosaurs. A couple of Tyrannosaurus rex poops were found in Canada with preserved chunks of meat and bone inside. Scientists learned from the fossils that the T. rex, unlike crocodilians, only partially digested its meals, which must have traveled through the animal relatively quickly. This would have meant that the tyrannosaurs must have ingested an impressive volume of flesh to feed their enormous bodies — it would have also been a boon for dung beetles and other scavengers. Ew.

How does a turd become a fossil? Frandsen is glad you asked. “A very unique set of circumstances lead a poo to get fossilized. You have to have a critter, a prehistoric critter of some kind, that does its normal thing, and the turd either has to fall into sediment and be quickly covered by mud or silt, water,” he said. The key is that the poo is kept away from elements that would disintegrate it, including scavenging animals and weather. Think of how rare it is even for bones and teeth to be preserved through the ages; in this way, poo that stays intact long enough to become a fossil is much more rare and special.

“Over many, many thousands of years, or millions of years, the minerals leach into turd and replace the turd composition with minerals,” he says. “And then you have coprolite. And it also fossilizes the bits within the turd — so if the animal ate a fish and the turd is full of fish scales and fins and that type of thing, the turd will also have those bits of fossilized material in it.”

It’s not gross, at least not anymore. The bacteria that would have made the shit stink are long gone, and now it’s basically a rock, except it’s a rock that preserves a little piece of natural history. Frandsen lovingly describes the old poop: “They’re little mini time capsules. You look at one and learn about animal physiology, digestion, diet. Sometimes you can find pollen — you learn all about their ecosystem and the animal itself, all from this little nugget of poop. Whereas, if you find a bone, that’s really neat, but it is just a bone.”

While eBay claims to have thousands of coprolites for sale for a small chunk of change, the vast majority of those are fakes, says Frandsen. “They’re not coprolites at all. They’re rocks that didn’t have value until someone said, ‘Hey, that’s probably a dinosaur turd.’”

How can you tell the forgeries from the real deal? There are some chemical analyses that will help, but you can tell a lot from the shape, he says. Many coprolites boast that distinct turd shape, and the best have, “for lack of a better term, the proper sphincter marks.” The crown jewel of Frandsen’s collection is a four-pound beauty named “Precious,” which likely came from a very large crocodile between 23 and five million years ago. And, well, it’s not hard to see what it is.

There are probably fewer than 10 true, verified dinosaur coprolites that have been found, says Frandsen. A lot of the fossil turds from the time of the dinosaurs properly belong to crocodilians, and there could be several explanations for that, including perhaps that dinosaur poop was less solid and more attractive to scavengers.

“Dinosaurs were big,” he says. “This is why you don’t find huge coprolites — it has a splatter effect. A giant dinosaur goes poop, it falls, it breaks up, critters come scavenge it, bugs come scavenge it, it washes away. Whereas smaller animals, like a crocodilian, they’re very low to the ground. They’re already low, so when they make a poop, it doesn’t have far to go — a few inches. And they’re, a lot of times, in the marsh, in the muck, so it goes and settles and gets covered very quickly, so it doesn’t get scavenged, it doesn’t break up.”

Crocodilians have very acidic stomachs that dissolve everything down to the bones, allowing them to digest pretty much everything of nutritional value. Proof that critters didn’t see crocodile dung as a snack: One of Frandsen’s coprolites shows evidence that some aquatic creature came along, went for a bite, then thought “nope” and spat it out. (The technical term for this is aborted coprophagy.) “It’s probably the best bite mark coprolite that has ever been discovered,” he says. Cases like these are scientifically interesting because preserved teeth impressions are so rare.

Frandsen’s collection is on tour and currently on display at the South Florida Museum. He has also donated specimens to museums for scientific study, or to get them on display where people will get excited about them. Some are at the National Poo Museum, which surprisingly had had no coprolite in its collection. What’s the harm in a little potty humor if it gets humans of all ages engaged with science and natural history, right? “I get a lot of messages from young kids wanting to learn more. And that’s really cool.”