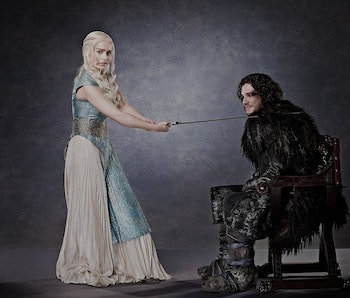 The latest break-up on Game of Thrones ended on a relatively cordial note. After saying goodbye to her hot undercover lover, Daario Naharis, the Mother of Dragons immediately left to seek consolation in the words of Tyrion Lannister. But ever since the death of her child and first husband, Khal Drogo, Daenerys’s heart hasn’t quite been in it – and that’s been clear for quite a while.

The Dragon Queen is considering her options for marriage in Westeros already (she spelled that out as plainly as she could for Daario, after all) and after six seasons of countless deaths, the headcount of noble bachelors in Westeros is pretty low. While some pairings are already popular among the fandom, one has stood out above them all from the beginning, treading careful waters because of the expected reveal in the finale. What’s more, this pairing — Jon Snow and Daenerys Stormborn — seems to have support from cast member Sophie Turner, who dropped a few hints about what to expect in the coming seasons.

Turner, who plays Sansa Stark, was asked a question about a possible marriage between her and Snow (who would technically be Sansa’s cousin now), and the actress immediately shot it down. Instead, she turned to the possibility of Jon and Daenerys, saying that “Jon and Daenerys are going to end up together, probably.”

Earlier this week, Emilia Clarke herself chimed in on the theory, saying that she’s heard nothing about it among the cast and crew so far. “Those rumors have never been substantiated within the Game of Thrones circle,” Clarke told Entertainment Weekly. She also brought up the mortality rate on the show, and the possibility that instead of an union, the two might end up going head-to-head for the Iron Throne. “I could kill him. He could kill me. He could be dead before we even meet. I could be dead before we even meet. Arya could kill us both! You never know! Anything’s possible. All I know is winter is coming … and I’m bringing the heat!”

Jon is now the presumed son of Daenerys’s brother, Rhaegar Targaryen, and Ned Stark’s sister, Lyanna, making him Daenerys’s nephew – which would be seen as completely disgusting in the real world. Throughout the noble houses of Westeros (and admittedly some real life noble houses, too, ahem), incest isn’t viewed as too negative — and House Targaryen was among the most accepting. Luckily, if you’re feeling weirded out by that possibility, you aren’t alone:

From the standpoint of a Westerosi strategist like Tyrion or Varys, a union between two houses that may be at the top of their games might be a match made in heaven. The two aren’t far apart in age and have a history of underdog victories that have now brought them incredible titles (likeDany’s “Khaleesi” among the Dothraki and Jon’s “King in the North” among the Northern houses) and Daenerys’s birthright is now supported by a great number of powerful houses, right under Cersei Lannister’s nose. After accepting Jon Snow as their King in the North, his unspoken family claim is all but accepted, and a union between the houses could make for a powerful army. As some point out, their union (or battle) could have been fated all along:

Regardless, Daenerys is now an eligible bachelorette (as far as using that position to make new alliances) and Jon is far from her only option: Jorah is venturing out in order to solve his dragonscale problem, Tyrion Lannister is totally single, Yara Greyjoy is down for anything, and Dany can also strike out on her own. Whatever the future holds, it’ll be a year until we all find out.