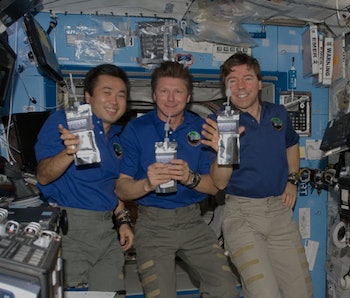 On Tuesday, NASA awarded a $5.1 million contract. The goal? Develop technology that will recycle astronaut pee into fresh water.

The lucky business is Paragon Space Development Corporation, which specializes in environmental control systems for spacecraft. The new contract is for the delivery of a Brine Processor Assembly (BPA), under NASA’s Advanced Exploration Systems division. The system will launch into space sometime during a 2018 flight and will undergo a test demonstration on the International Space Station.

The goal for the BPA is to achieve at least 94 percent of clean water recovery from urine. The eight-year-old system the International Space Station uses is 93 percent effective, so Paragon’s technology doesn’t have to meet a very high threshold, but every step closer to 100 percent water recovery is key.

The future of space travel and exploration critically depends on systems and technology that allow humans to reuse the materials and resources they already carry onboard. That’s why NASA is investing heavily on the idea of growing food in space; on sustainable forms of propulsion that don’t require finite amounts of fuel; and so forth.

NASA hasn’t given many details about exactly what the new BPA will do differently in order to recover more water from astronaut pee, but if it’s anything like the current system, there will be a ton of different filters and distillers processing the urine over several stages in order to reach a potable purity. One thing to keep in mind is that Paragon’s engineers need to take into the account the zero-gravity environment of space and figure out how exactly BPA will move liquid through the various filters and extract impurities and toxins to make pee safe to drink.