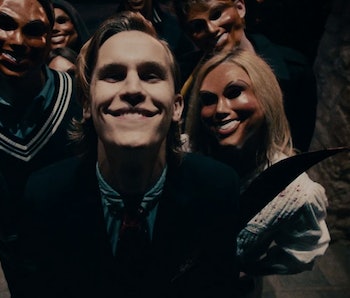 If you think about it long enough, the “home invasion thriller” is an effectively American affair. In a country where personal property and safety are valued above all else, the home invasion film posits a scenario that trespasses against both. While the newest entry into The Purge series, Purge: Election Year has moved well beyond the first film’s home invasion setting, Election Year reaffirms the sub-genre’s relation to our country’s founding principles. Property is our constitutional right, or as Bobby Hill so eloquently put it: “That’s my purse; I don’t know you.”

The notion that any psycho can barge into your home is terrifying. What makes home invasion thrillers interesting, however, is how often the smarter hostages will flip the tables and turn the situation into a game of cat-and-mouse. Great home invasion thrillers stage their films like an intricate board game, and when the players are equal, the results are often tense and electrifying. While not every film on the list is a strictly “horror” film, the scares in these movies are often generated from the looming threat of invasion.

The Strangers is a checklist of creepy items. Weird masks? Check. Big empty house? Check. Based on a “true story”? Check. The Strangers is an effective thriller because it juggles its many scare factors and produces a film that’s more than the sum of its parts.

Liv Tyler and Scott Speedman are a married couple whose domestic bliss is soon interrupted by a band of masked psychos. They decide that psychologically torturing a nice, suburban couple is the right thing to do. What follows is a tense thriller that’s more classically terrifying than some of the other, more stylish, films on this list.

Hush is such a smart concept, it probably could have coasted on its central plot device. The film could have easily just starred a deaf woman as the victim of a home invasion, and ridden it all the way to genre success. Instead, Madison Young’s deafness is only the jumping off point for a brilliant one versus one battle between Young and the masked psycho terrorizing her in her secluded forest cabin.

As both characters cleverly navigate around Young’s deafness, the ante of this cat-and-mouse game have never been higher. It helps that Young is such a crafty protagonist that audiences can’t help but root for the heroine, playing such a dangerous game despite her handicap.

Adam Wingard became a horror sensation partly because of his breakout film, You’re Next. What seems like your typical home invasion thriller at first becomes an action-packed battle between a band of masked murders and an unassuming survivalist. The movie quickly becomes an incredibly bloody version of Home Alone, where instead of paint cans tied to rope, there’s a makeshift guillotine fashioned from an axe.

Michael Haneke’s Funny Games shouldn’t be enjoyable. The film is purposely rigged against the poor Austrian family held hostage by the psycho duo of Peter and Paul. At one point in the film, they even break the fourth wall in order to maintain their murder spree. Turns out nothing is scarier than a pair of psychos who can cheat their way to winning the eponymous “game” they put their hostage family through. The film’s cinematic tricks and post-modernism earned it one of the rare horror films entered into the Cannes Film Festival.

Replace a single home with a large apartment complex, and change out the murderous psychos for alien monsters and you get Attack the Block. This horror-comedy produced by Edgar Wright and starring Star Wars: The Force Awakens’ John Boyega is a home invasion thriller on a much grander, ambitious scale. The film combines enough horror elements that it can even be considered a variation of Ridley Scott’s Alien movie played out in London, England.

While it lacks the intricate details of its more domesticated cousins, Attack the Block is just a more ambitious, and perhaps literal, invasion thriller than the smaller films on this list.

David Fincher’s reputation as a methodical perfectionist makes him a natural fit to tackle a genre that involves meticulous planning and intricate mechanization. It’s why Fincher’s Panic Room is such a perfect film for a director whose most famous works involve a hallucinating insomniac, and Mark Zuckerberg.

Jodie Foster’s one-woman war against a group of sieging robbers is like watching a game of chess that cleverly utilizes Foster’s home as both a tool and weapon against her intruders. Fincher is clearly in his element, staging each battle scene like a game between two players, playing in a house sized board game.

French film Inside (l’intérieur) is objectively the most extreme film on this list. Pitting two women against each other in a desperate struggle to claim a baby in utero, Inside is considered one of the best films to come out of the extreme horror wave of French cinema. Resorting to a more realistic version of Cronenberg’s body horror, Inside is not for the faint of heart, but a wholly recommended viewing for fans of extreme cinema.

More like this
Culture
Sep. 18, 2022
You need to watch the sexiest sci-fi thriller of all time on Amazon Prime ASAP
By Andy Crump
Entertainment
Sep. 21, 2022
You need to watch DC’s most underrated movie of all time on Netflix ASAP
By Eric Francisco
Entertainment
Sep. 25, 2022
Knock at the Cabin trailer gets roasted online for one bizarre mistake
By Alex Welch
Related Tags
Share: