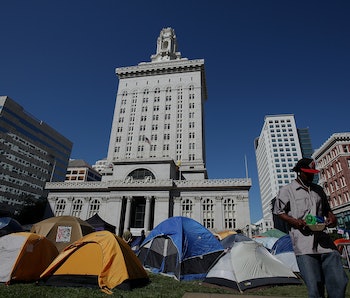 The idea of “Basic Income” is as follows: give everyone a basic, livable wage without any restrictions, and society’s poverty problems will work themselves out. It’s an expensive thesis that is surprisingly more complex than just “give everyone money,” and Silicon Valley incubator Y Combinator is ready to give the hypothesis a test run in Oakland, California.

Y Combinator’s brand new research division, YC Research, has chosen the “Basic Income” plan as its first major project. To help study its efficacy and feasibility, the incubator has chosen Oakland as the site of its new pilot project test. Over the course of a year, YC Research will give a monthly wage of “$1,500 or $2,000” to anywhere between “30 to 50” Oakland citizens. Y Combinator Research’s Matt Krisiloff tells Ars Technica that this will amount to about $1.5 million for one year. The project has chosen Elizabeth Rhodes to oversee the pilot.

Basic Income isn’t just free money, though. The idea follows that once the basic needs of a person such as food, shelter, and medicine are taken care of, the individual would be free to pursue positive lifestyle choices. The theory incorporates beliefs that a basic income will lead to decreased crime rates, higher performances in schools, and better public health. Detractors will argue that having such a system in place will eliminate incentive to work, creating a class of freeloaders.

Once it was announced that Oakland would pilot the Basic Income test, local and state politicians voiced their support, including Oakland mayor Libby Schaaf and Rep. Barbara Lee (D-Oakland). The city was chosen due to its diverse population, and the recent wave of gentrification caused by spillover from San Francisco. However, not everyone is ecstatic with the news, and it’s not just the usual suspects.

Causa Justa :: Just Cause, a community organization fighting against racism and gentrification among other social issues, have voiced skepticism. They believe that a Silicon Valley institution, one of the main causes of gentrification, cannot truly understand the plight of the working class and poor citizens their presence is displacing in the first place.

This experiment will be run and overseen like any other scientific test, with carefully collected data and a control-group to compare against. If the test proves successful, Y Combinator plans on rolling out the pilot to more and more cities across the Bay Area. While the project is still in its very early stages, the city of Oakland will be an interesting and apt choice considering its diverse demographic across race, employment, education, and socio-economic status.