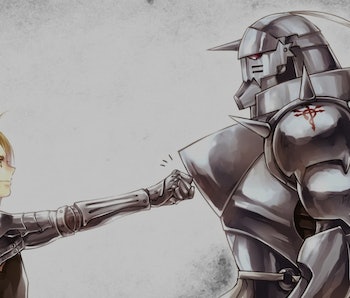 You may not realize it if your vague impression of anime is limited to cute animals and big eyes; but as with American animation, the Japanese export can be surprisingly deep and emotionally affecting, with adult themes running through even more childish-looking series. You just need to know how to look for it.

Luckily some of us were weird philosopher kids in college, spent years watching these cartoons, and now work for publications that allow us to write about them on the internet. Serious philosophical undertones can be found in a whole host of anime, from the most quirky to the very serious, but we will start with arguably one of the best anime/manga series to ever grace our presence, Fullmetal Alchemist: Brotherhood.

Fullmetal Alchemist: Brotherhood is the second adaptation of the original Fullmetal Alchemist manga, which was written by Hiromu Arakawa. The story follows two young alchemists, Edward and Alphonse Elric. When their mother passes away, the boys attempt to bring her back to life by performing human transmutation, a forbidden technique in alchemy. The two boys pay a terrible price for their actions: Edward loses his leg and Alphonse loses his physical body. Luckily, Edward is at least able to transplant Alphonse’s soul into a suit of armor by giving up his own arm, making them a mangled metal pair. The story follows the boys in their journey to acquire a philosopher’s stone, which would bypass the limitations of alchemy and allow Alphonse to get his body back.

Brotherhood features many actual alchemic ideas, led by the belief in a philosopher’s stone and the creation of homunculi. And that’s just one of many philosophical ideas embedded in the action-adventure of Full Metal Alchemist: Brotherhood.

Epistemology is the study of knowledge. It would seem straightforward, but the definition of truth has been batted around for millennia. Truth, in Fullmetal Alchemist: Brotherhood, is an actual being. It is a symbolization of God and knows all things about the world. When Edward meets Truth, the being shows Ed all things and he learns of many of the world’s secrets. But, this knowledge comes at a steep price. It raises the question, if we were to acquire a wealth of actual knowledge and learn the truth of the world, what would we do with the knowledge and what would be the price? It may just be better to remain ignorant to truth, especially in Brotherhood where Truth is a somewhat creepy and vengeful individual.

2. Morality in Regard to Human Life

Morality is relative… or maybe it isn’t? Some philosophers believe that morality is relative to the person; therefore, we cannot hold others to the same moral standards that we possess. However, this causes an issue when it comes to issues, such as, genital mutilation or animal abuse. If certain practices exist as parts of specific cultures, do we have the right to step into that space and condemn others for their actions?

In Brotherhood, morality fuels the background conflict. The Ishvalan War is caused by general cultural and religious divide between the Ishvalans and the Amestrians which all came to a head when an Amestrian soldier shot an Ishvalan child. Seven years into the Ishvalan War, State Alchemists were brought in and effectively killed many of the Ishvalan people, even the women and children. Many of those alchemists struggle with justifying their actions in the war. The show seems eerily familiar to war in real life, but issues of morality always arise when dealing with war.

The story of Shou Tucker, the “Sewing-Life Alchemist,” offers another example of this. Experimentation on humans is usually considered to be an ethical problem in both real life and on the show. How far will we go to find out what the human body is actually capable of? Shou became obsessed with the development of chimeras, humanoid beings which are the combination of two or more dissimilar beings. In his desire to get approval as a State Alchemist, he sacrificed his wife in order to create the first speaking chimera. With a string of subsequent failures and his state license up for renewal, Tucker was desperate enough to fuse his daughter and her dog to create another chimera. As the chimera begs Edward to kill it, we question the ethical validity of bio scientific research as it applies to both humans and animals.

The famous philosopher, René Descartes, developed the idea of the mind-body distinction in order to further prove the possibility of an immortal soul. Descartes argues that the mind and the body exist as two separate entities. He implies that the destruction of the body does not necessarily equate to the destruction of the mind. The mind is unified with the body in order to create a complete human being.

This show would not exist without the concept of the mind-body distinction. Alphonse is alive because his mind is implanted within a suit of armor. The armor is an extension of his mind, similarly to what Descartes believes about the human body. Alphonse is forced to struggle with his own humanity as people shun him simply for his appearance. But, Alphonse constantly reiterates that he is a human with a soul, even if he lacks the ability to eat or physically cry. Sadly, Alphonse still feels human emotion and is extremely kind and gentile, which makes him one of the more beloved characters.

Humanity is a constant theme throughout the show. Al and the chimeras are just two examples, but the homonculi raise the most questions on the nature of humanity. Is the most important part of a human their physical appearance or emotional self? If we focus mainly on physical appearance, then all of the homonculi could be considered human, because they possess the physical form. But, the only one that seems to display a range of emotion is Greed. All the other homonculi are either extremely single minded or play human, displaying emotion, but failing to actually possess these feelings.

Brotherhood revolves around one general principle, the “Law of Equivalent Exchange”. Alphonse’s definition of the law states, “Humankind cannot gain anything without first giving something in return.” To obtain something of equal value must be lost. This could be compared to the scientific principle of the conservation of energy. Energy does not disappear, but is transformed into some other substance. The “Law of Equivalent Exchange” can be examined as a philosophical way of viewing life. The show focuses on a general sense of sacrifice that is applicable to our own lives. Nothing can be attained without giving up something in return, whether it be time, money, or health. The value that we place on these things differs, but each is extremely important and can have adverse effects on our lives.

It would take an entire book to cover all the philosophical themes within Brotherhood. If anybody is interested in anime, this is the first show that I would recommend because of the mix of humor, action, character development, and thought provoking scenes. Just make sure that it is the Brotherhood version and not the less exciting, though equally thought-provoking, 2003 version of Fullmetal Alchemist.