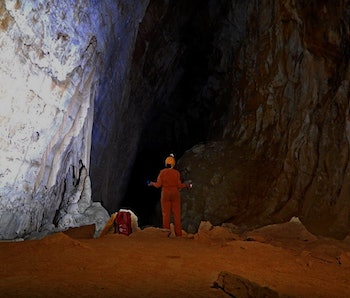 Next week, the European Space Agency will send six astronauts from around the world though a next phase of training by sending them in the exact opposite direction of space: the depths of the Earth. About 2,600 feet below the surface of Sardinia, Italy, exists a set of rocky caves with its own course that the ESA plans to use to simulate a space expedition and train its newest batch of astronauts for safely exploring alien environments.

The rationale behind sending them into the caves stems from the fact that those environment are devoid of natural light and the kind of heavy activity and sounds humans are used to when venturing off into the wild. Moving up and down cave walls is a lot like going on a spacewalk in a zero-gravity or microgravity environment: you need to stay close to the wall, be alert for any changes in the structure and your surrounding environment, and learn to work as both an individual and within a team.

The Sardinia course itself is called the Cooperative Adventure for Valuing and Exercising (CAVES) course. ESA had previously sent astronauts through the course in 2014. As the name states, one of the biggest goals behind this initiative is to foster cooperation between astronauts from different cultures and countries, in order to ensure the team will be equipped with exploring new extraterrestrial environments without much difficulty.

The course will also be a testing ground for new kinds of photographic equipment capable of making 3D maps of the cave environments, as well as communications systems that can transmit through the 2,600 feet of rock.

The astronauts will head down to the caves on July 1 and begin a six-night expedition from which they’ll be cut off from sunlight and exposed to the darkness and silence characteristic of underground environments. Sounds gnarly, but when humans finally make the exploration of other worlds a normal part of space operations, they’ll probably need to get used to even harsher environments for longer durations. Being an astronaut is also tough work, and CAVES is the first step toward getting men and women around the world prepared for even more grueling — though equally more rewarding — opportunities to go where no one has gone before.