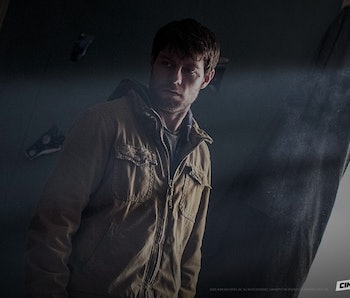 Stories have always been a way for us to come to terms with ourselves, our surroundings, and each other. The protagonists and monsters in our stories reveal a lot about us and our anxieties. From zombies to vampires and werewolves to demons, the monsters in our narratives aren’t just imagined antagonists devoid of cultural commentary.

The last few years have seen a number of zombies making their way to television on shows like The Walking Dead and Fear the Walking Dead, but shows like Outcast, Wynonna Earp and the upcoming The Exorcist series are upping the number of demons on TV – perhaps signaling something of a shifting tide in the fictional monsters that we find most impactful.

Our cultural obsession with zombies is long and storied. Originating from Haitian culture and reflecting the horrors of slavery and the fear of enslavement after death, zombies have long been a clear expression of the fear of losing one’s essential humanity. Modern zombie stories like Night of the Living Dead and 28 Days Later show zombies that are very different from the ones that came from Haitian culture, turning them into monsters instead of victims. In many ways, today’s zombie narratives are totally and fundamentally different from those where zombies originated.

What hasn’t changed, though, is that zombies are used to talk about our society, our anxieties about being taken over, and our fear of having our humanity co-opted, whether by disease, addiction, prejudice or a kind of cultural numbness. Zombie narratives are very clearly about our fears on a societal level, and they often operate to expose and comment on the perceived evils within systems.

Demons, however, reflect a totally different set of anxieties that may have much more to do with a fear of ourselves than a fear of society.

Like most of our cultural monsters, demons are old and have a bizarre and winding history. Prominently featured in a number of the world’s religions, demons are often regarded as wicked creatures, as the malevolent equivalent of angels, and as evil beings capable of possession.

Much like zombies, demons don’t always appear in the same way in our stories. Sometimes appearing through possession and other times having their own individual corporeal forms, demon lore (like any historically significant monster lore) has aspects that are open to interpretation. What’s pretty consistent across the board, though, is that demons tend to represent anxieties, fears and horrors as they relate to us as people and to the human experience.

Demons exist to do evil, wreak havoc and create hatred and discontent. Sometimes, demons coming in the form deceased people, come back without any of their redeeming qualities, and other times they appear in the context of possession (like in The Exorcist). They speak to an inner dastardly nature that makes itself known in supernatural, exaggerated ways. But in most observable instances of demons in pop culture, it’s clear that the evil is very interior, having to do with the dark shadows and corners of human nature, life and death, rather than the evils that come at the hands of society.

Just as “inner demons” speak to our internal anxieties, the things we dont like about ourselves, the things we struggle with and rebel against, the demons we see in popular culture may speak to our fears about who we are, about the evil that’s inside of us or that might be allowed to take root within us.

Demons that we see on television may, in some ways, be external stand-ins for the broad-level “inner demons” of the human race — a way to confront the evils that we see in humans in way that is tangible, that can be defeated, and that can be exorcised.

In his book called Exorcising Our Demons: Magic, Witchcraft and Visual Culture in Early Modern Europe, Charles Zika talks about our fundamental desire to do away with the parts of the human experience that make us uncomfortable.

“The religious, the violent, the evil, the irrational, the demonic,” says Zika, “these are some of the contemporary demons that are alive and well at the turn of the twenty-first century, which we constantly endeavor to exorcise from the common sense of our experience.”

If zombies speak to our worries about society, demons may speak to our worries about ourselves and about the human experience. In all of our contradictions and multitudes, we are benevolent, malevolent, kind, cruel, lovable and deeply detestable at the same time. Being human is messy and uncomfortable, and accepting that there are ugly, unlovable parts of us is hard.

In the context of narrative, demons represent an opportunity to externalize the evil. They take the shitty parts of human nature, of the things we fear we might be, somewhere deep down, and put them in a form that’s easy to observe, to hate, to kill or to banish. They represent our anxieties about good and evil and where we fall in the mix, and may have an awful lot to do with the complex process of understanding that for the most part, humans don’t fall into neat categories of “good” and “evil,” that we’re all both and that the battle between good and evil might take place inside of us.