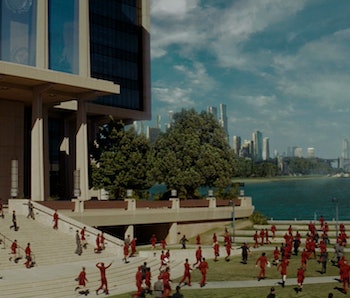 In the upcoming sequel to the 1996 summer blockbuster Independence Day, a massive alien force comes to Earth to avenge losses sustained at Will Smith’s hand 20 years earlier. Aware that this might happen, the planet has spent the previous two decades preparing: creating Earth Space Defense, an international defense program and warning system with bases on the moon, Mars, and Saturn’s moon Rhea, and a lot of laser guns built using repurposed alien technology. The whole thing looks very Hollywood high budget, but, in reality, it represents a paltry effort.

Defending Earth from alien invaders will require a lot more than some outposts and a Hemsworth brother. Still, even that’s better than what we’ve got. As it stands, we possess neither of the two things we’d need to repel an extraterrestrial attack: a system to find and assess alien threats and a means to destroy incoming ships. We’re way closer on the former than the latter.

Believe it or not, planetary defense is a real part of space research and exploration — albeit in terms of protecting the planet against natural threats, like asteroids, comets, surprise solar flares, etc. For NASA, other space agencies around the world, and private companies, planetary defense is basically limited to a discussion of asteroid impact avoidance and deflection, and the development of technologies that allow us to track near-Earth objects that might pose a threat should their travel path ever line up with ours. To that end, NASA has been bolstering its efforts to improve instruments designed to track such rocks zipping through the solar system — most notably through the recent opening of the Planetary Defense Coordination Office, to better study and characterize different near-Earth asteroids and comets and predict their orbits around the sun in relation to Earth.

Tracking technologies, like the Wide-field Infrared Survey Explorer space telescope, would let us know if an alien battalion were en route to Earth long before it reached the planet — provided the aliens were in a pretty big ship and traveling slow enough to give us time to parse the patterns. The issue with WISE, from a strategic defense perspective, is just how easy it would be for aliens to destroy. It is a scientific instrument and, as such, not designed to be combat ready.

Unfortunately, we still have no actual way of engaging with an object that’s on a crash course for a pale blue dot. Under the asteroid-focused planetary defense model, NASA is actually supporting a few off-the-wall projects with a bit of R&D funding, such as the gravity tractor. But this isn’t technology we could use to actually defend ourselves against creatures with superior ships. The only technology we have that can really do that is nuclear bombs.

Whether our lives are threatened by an asteroid or extraterrestrials, bombs are likely the best answer we’ve got. If it comes down to saving humanity, you better believe we’ll be launching nukes straight up.

Of course, this is easier said than done. The problem, as the aforementioned movies each discussed, is that you can’t simply launch a nuke or 12 straight into an asteroid. They’ll barely make a dent into the rock, and will hardly affect the trajectory of the damn thing. When it comes to alien invasion, we might have better luck, since a spaceship would need to slow down upon approaching the planet to ensure its safety. At deceased speeds and with a structure that would presumably facilitate interstellar travel (i.e. made to be lightweight with a relatively hollow interior), an alien ship would be a lot more vulnerable to damage by nuclear weapons.

Unfortunately, if an alien civilization is capable of waging wars light-years away from its home, it’s probably already found a way to mitigate or even totally offset damage by a conventional bombs. We’d have to find a way to crack our way in and blow the ship up from the inside.

Meet the Hypervelocity Asteroid Intercept Vehicle, or HAIV: a seemingly conventional spacecraft carrying a nuclear explosive device capable of blowing an object up from the inside out. HAIV is basically two main components — a “kinetic impactor” that bores a hole into the object and creates a hollow path behind it, and an encasement for the nuke.

The genius behind HAIV, aeronautics engineer Bong Wie of Iowa State University, conceived of HAIV as a potential way to defend Earth against asteroid threats. Wie, who is also director the university’s Asteroid Deflection Research Center, says his projectile, which would be between 1000 to 2000 kilograms in mass and move at about 5 kilometers per second, contains enough kinetic energy to create a hole or crater about 10 meters deep and 20 meters wide in an oncoming asteroid. The nuclear device would go into that crater behind the spacecraft and, boom goes the dynamite.

If we have at least a 5-year warning time, Wie says, mankind will be able to prep a HAIV mission. A nuclear explosion will then occur in space far outside the lunar distance. “Less than 0.1% of resulting fragments would enter Earth’s atmosphere.”

The reason we would need to design and build HAIV from scratch after we know an asteroid is on its way is because you need to cater the whole thing to destroy the asteroid as optimally as possible. For an asteroid with a diameter of 300 meters, the best kind of nuclear device would probably weigh about 1000 kilograms. A larger meteor will need something bigger; smaller rocks could be crushed with smaller bombs.

Wie and his colleagues were previously awarded two phases of funding through the NASA Innovative Advanced Concepts (NIAC) program. “This concept is now further being investigated by a team of researchers from NASA and the national defense laboratories for a possible flight demonstration in the near future,” he says. “However, all previous studies of HAIV were based on conceptual and computational research. No experimental validation or testing of the HAIV concept has been performed yet.”

Wie has never explained whether the HAIV might be a useful system to protect us from aliens, but he has said that the use of nuclear devices is the most cost-effective option for mitigating impact threat.

Wie is loathe to speculate on the potential weaponization of his technology. But this is not a trait universal to space scientists. Igor Ashurbeiyli is actively planning to repel an attack. The chairman of the Moscow-based International Expert Society on Space Threat Defense, Ashurbeiyli told the audience at the 4th Manfred Lachs International Conference on Conflicts in Space and the Rule of Law, that he was preparing a proposal for an armed, unmanned space platform dedicated to monitoring activity in space and on the Earth and capable of directly neutralizing both.

His concept is called the Universal Robotic Battle Cosmic Platform, or URBOCOP. Exactly what it would look like is hard to say, but Ashurbeiyli says URBOCOP would essentially be an autonomously-run system — “free from human bias” — that could identify a variety of threats in advance and defend the planet from them. He lists solar flares, changes to Earth’s magnetosphere, asteroids and comets, man-made space debris, unforeseen effects of climate change, cosmic rays, biological threats from other parts of space — all as potential space threats. This situation reminds one of Russian roulette, he told the audience. “Only with rocks, huge pieces of metal, solar energy and other surprises, acting as bullets and putting all of humanity at fatal risk.”

In addition, Ashurbeiyli also thinks URBOCOP could work to defend the Earth against intelligent extraterrestrials, or even man-made threats here on the surface. Imagine two countries warring against one-another and launching missiles back and forth. URBOCOP could very easily strike to shut those launches down before those weapons even get into the air.

All of that raises an enormous number of questions. What kind of A.I. system would be used to make sure URBOCOP doesn’t turn against us or mistakenly destroy civilian equipment or structures? What will this thing look like? If Wie is right and nukes are really the only thing that will protect us from large asteroids, are we prepared to store nukes on a space platform floating in orbit?

Ashurbeiyli didn’t answer those questions, or even really outline how URBOCOP would work. That’s all being detailed in a presentation later this year. But he’s striving hard to make discussions of planetary defense technologies move from the outer rim of the scientific community, and closer to the mainstream.

There are few reasons to think he’s being foolish in this regard. Even if the chances of Earth being attacked by aliens is next to nothing, space is a pretty volatile place. You never know what strange shit the sun will spew on a whim; what weird comet or asteroid will appear out of nowhere and make its way towards our neighborhood; and so forth. And in reality, we seem to already possess the tools we need to pick up on dangers, and strike at them. It’s just a matter of refining them and putting them towards ensuring Earth stays a safe place to live — seeing how it’s the only planet we have so far.