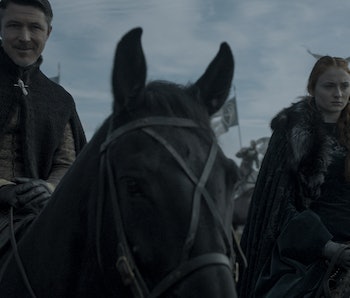 Sansa Stark has had one of the most fascinating character arcs on Game of Thrones, but “The Battle of the Bastards” took her to a whole new level. The episode solidified just how far she’s come from the idealistic, naive girl she was at the beginning of the show. By coldly accepting her brother Rickon’s inevitable death and calmly planning for half of Jon’s army to die, she demonstrated a machiavellian spirit that put even Littlefinger to shame.

Some fans are salty about Sansa’s cold-heartedness, arguing that there was no reason she shouldn’t have told Jon backup was coming and needlessly sacrificed over half his men, but it fits her evolution.

Post-Battle of the Bastards, she’s now the ultimate realist on Game of Thrones, second to no one except maybe Margaery Tyrell. She didn’t tell Jon about the backup from The Vale because she knew she couldn’t count on Littlefinger to show up, and as much as she loves Jon, she knew she couldn’t count on him to win the battle, either. She’s learned the hard way that the only person she can count on is herself. Even then, it might not be enough.

As a man in a world run by men — though the tide might be shifting in that regard too, after Daenerys and Yara’s alliance — Littlefinger has had less opportunity to come face to face with the possibility of his own death, disenfranchisement, or debasement. He still thinks chaos is a ladder and wants to sow its seeds in the world, orchestrating as much as possible. Sansa, on the other hand, knows chaos is a ladder; knows she must fight to reach the top, and even then, her safety is not guaranteed. She was ready to die during the battle just as much as she was ready for Rickon’s death and the possibility of Jon’s.

The teaser for “The Winds of Winter” looks like Littlefinger has certain expectations after coming to Sansa’s aid — expectations that might lead to a proposal.

But if he does propose, he’ll be underestimating Sansa and how few fucks she has left to give. And that shows that she’s beaten him at his own game once and for all. The rest of Westeros better watch out, because even if Jon is a questionable battle commander, back in Winterfell with Sansa by his side, she’ll provide the kind of shrewd, stone-cold razor sharp council we haven’t seen the likes of since Tywin Lannister.