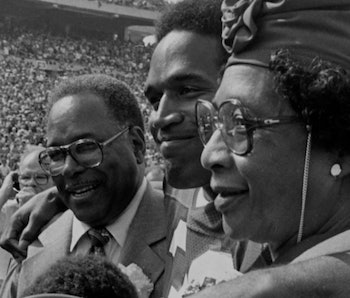 When it comes to O.J.-Simpson-related narratives, the first question for consumers ends up being: does this argue for guilt or innocence? Guilt is the norm, by far; the viewpoint is so commonplace, spread across so many tell-all stories, that Martin Sheen’s Simpson docu-series (yes, there’s another one), due next year, will gain ratings solely because it argues against the prevailing opinion.

Early returns suggested that ESPN’s 30 for 30 miniseries O.J.: Made in America would remain somewhat ambivalent about Simpson’s guilt or innocence. What it managed to do instead was argue that, in the grand scheme of Simpson’s significance as a public figure in America, the question was unimportant for several (to countless) reasons. And simultaneously, it did an incredible job – almost incidentally– of creating a coherent, non-sensational psychological profile for O.J. Simpson-as-murderer.

After all, Made in America does not adopt the murder trial as the sole focus. It is interested in systematically detailing how Simpson — one of the most unlikely candidates imaginable for the designation — became a civil rights hero. Thus, there are two episodes of absolutely no discussion of the crime before the action begins; it’s easy to forget how conspicuous Simpson was as a public figure in multiple cultural spheres, from sports to advertising to now-obscure sci-fi films, prior to the trial.

All of this is not just interesting context: It becomes hyper-relevant later in the series, in discussions with both L.A. civil rights leaders like Danny Bakewell and First African Methodist Episcopal Church minister Cecil “Chip” Murray, as well as several of the jurors. The discussions with the latter group — particularly with one elderly female juror, who goes so far as to characterize the verdict, point-blank, as “payback for Rodney King” — clarify that whether Simpson was guilty or innocent, objectively, was not even what that jury spent months deciding.

And could they be entirely blamed? Over the months of proceedings, the defense shifted the goalposts to make questions of race relations and the tyranny of the LAPD the ones that were truly being addressed. Made in America, then, shows how this became the moral onus that much of the jury felt was upon them. Isolated in the prison of a hotel, they may not have been privy to the round-the-clock media discourse, the full litany of Fuhrman slurs, and the vast demonstrations that went on in L.A. — at Cochran’s encouragement — during the trial, but at every point, its import was being dragged into the trial proceedings.

The People vs. O.J. Simpson ends with O.J. following his “welcome home party, staring in stunned relief at the statue of himself, as a young athlete, in his Rockingham backyard. In every aspect, Cuba Gooding, Jr. is playing a man who has gotten away with it. Made in America explores O.J.’s life after the trial and up to his incarceration for a string of felony charges after a would-be sale of Simpson sports memorabilia went wrong in a Las Vegas hotel room in 2007. The series’ incredible final chapter lays out the sordid facts of Simpson’s waning, hedonistic years before jail – creating a picture of a man crippled by an obsession with fame, and seeing himself as a hero in the eyes of others. Its footage and testimonials combine to mold something more convincing than some boilerplate sociopath diagnosis.

It sells the possibility of guilt even outside of the hard testimonial, including Simpson’s former manager claiming O.J. admitted guilt to him explicitly: “‘’If she did not answer the door with a knife she would still be alive.’”

It takes seven-plus hours, perhaps, to fully get inside the head of an individual who spent so much time and effort cultivating his public image — not to mention a ton of unseen footage that in many powerful ways, speaks for itself. O.J.: Made in America lays enough on the table, in terms of both curious background and explicit evidence, to not have to waste its time re-arguing one of the most famous trial cases in America either way. The viewers are allowed to do that work themselves, if that’s truly what interests them most about Ezra Edelman’s sprawling, contradiction-filled, societally more-than-relevant narrative.