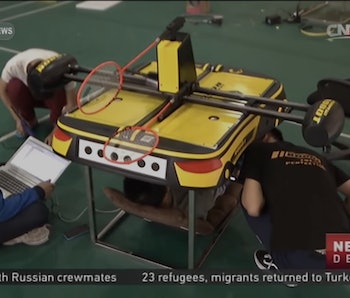 Lebron James has been described as robotic by commentators and competitors alike for his ruthless efficiency, power, and speed. While we’re probably a few years away from a fully-robotic android human capable of destroying the back-to-back dreams of Golden State Warriors fans, humanity’s Artificial Intelligence creations are getting pretty good at sports. They conquered foosball a few months ago (at least against BYU students), and now a group of Chinese university students have designed a fully-autonomous badminton-bot.

The badminton robot looks like a weird cross between a Roomba and some kind of industrial-size fly swatter. While it can’t beat professional players, it’s perfectly capable of whizzing around the court against amateurs, whacking birdies back over the net with robotic precision. Sure, it’s cheating by using two rackets — one swings horizontally, the other vertically, but when you consider it doesn’t have limbs it seems a bit more even. The robot uses several HD cameras on the front to track the birdie’s movement and predict where it’s going to go, communicating through Bluetooth to the motorized racket-swingers so it knows when to swat. It uses a complex positioning system to remember where it is on the court, too, so you can’t lure it out of bounds by hitting birdies toward the corners.

Robots have already been taking our jobs writing about sports, playing sports of their own, and now they’re coming for human recreational pastimes. Looks like we might have to legalize robot hunting sooner rather than later.