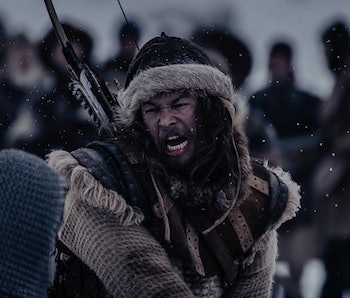 Released today and available on iTunes, Norwegian film The Last King is a little bit like Norway’s Game of Thrones… save for the fact that it’s based on real events.

The Last King tells the story of a real king Håkon Hkonsson — and the birkebeinerne or “Birch Legs” (simply put, the King’s men) who fought to protect him from the Baglers, an opposing party that wanted him dead and his bloodline ended.

Set in 1204, when Håkon was just a baby, the film follows the conflict that emerges following the death of the King Håkon, son of legendary King Sverre of Norway. Thought to be last of Sverre’s bloodline, Håkon revealed, moments before he’s assassinated in a failed coup, that he has a son with a woman named Inga of Varteig and that he is the heir to the throne.

The Baglers, now faced with an unexpected roadblock, must kill the heir in order to seize the throne, and the birkebeinerne must protect the infant King and deliver him safely to Nidaros (modern-day Trondheim) if Norway is to remain in the hands of the royal bloodline. The stakes are high — should the birkebeinerne fail, Norway will become a dependency of Denmark.

Much of the film focuses on the arduous journey North with the baby and delivers plenty of interest along the way. To start, the film is beautiful. It captures Norway’s dramatic, snow-covered beauty, from its tree-covered mountains to the Northern Lights. It’s a stunning backdrop for a story that almost immediately features a lot of beards, bows and blood.

Among our major players are Skjervald and Torstein, both committed to the birkebeinerne cause of delivering the baby to Nidaros, along with his mother Inga. Skilled fighters, they elevate skiing to near-superpower status as they make several high-speed escapes by ski and manage to use them to their tactical advantage in more than one fight.

Like Game of Thrones, The Last King (called Birkebeinerne in Norway) has a lot of beards, a lot of fighting, a lot of blood, and a big, central power struggle. There’s revenge, heartbreak, risk and a number of pretty brutal deaths. Unlike Game of Thrones, though, The Last King is based in reality and inspired by a real king’s journey to power. There are no dragons, resurrections or vast, fantastic worlds, but it has plenty of satisfying fights and the backdrop is drop-dead gorgeous.

If youre a Game of Thrones fan looking to satisfy your beards and brutality cravings outside of Sunday nights, The Last King isn’t a bad pick to get your fill. But The Last King’s greatness doesn’t come from its similarity to the HBO show. Instead, it succeeds because it it’s impressive in scale, with exciting fight scenes, well-executed character and a pace that hits all the right marks. It’s not exactly a historical deep-dive into the story of Medieval Norway, but it does give some great context and serves as a great starting place for anyone interested in Norway’s history.

Even for those who aren’t, though, its a satisfying ride of a film full of snow, skis, saunas and spears.