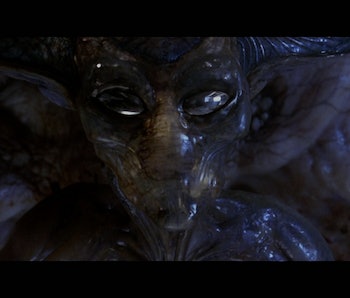 This line from the Doctor Who episode “Last Christmas” is the microcosm in which most critical thinking about alien invasion stories should probably exist. Throughout science-fiction tradition, alien invasion stories of all scopes – are pretty much as played-out as the notion of a gunfighter-lousy western. And yet, they could and should be seen as the legacy of real-life invaders like colonial Brits, or manifest destiny-loving Americans; the alien invasion story raises the specter of the white-Anglo conscience coming back to haunt. And shame.

In the upcoming Independence Day: Resurgence, Jeff Goldblum’s David Levinson notices that the aliens “like to get the landmarks,” a reference to the White House being blown up in the original 1995 film, and London Bridge being decimated in the sequel. The landmarks quip is one of the funnier lines in the promotion for the new movie, but it’s also a telling symbol for what an invaded people feel: a sense of having what’s familiar taken away completely.

Because aliens are mixed allegories of “the other” (Native Americans, immigrants, minorities, take your pick), having them “invade us” can be read as a story of comeuppance, rather than struggle against freedom or oppression. In short, even though the humans didn’t invade the aliens first, metaphorically, they kind of did.

The earliest alien invasion novel of them all – H.G. Wells’s The War of the Worlds — gave science fiction some of its earliest Bug-Eyed-Monsters (commonly known as BEMs by old-school aficionados.) And Wells wasn’t afraid to make sure the reader understood how to feel specifically about the monsters.

“There was something fungiod in the oily brown skin, something in the clumsy deliberation of their tedious movements unspeakably terrible,” he wrote. “Even at this first encounter, this first glimpse, I was overcome with disgust and dread.”

This actually can be read as straight-up racist and xenophobic. But then again, as that Doctor Who joke points out, the very nature of fearing extraterrestrials requires an element of xenophobia to be built-in to the narrative of most alien stories. The zeitgeist can sometimes feel differently about visitors from another planet, but the dominant tendency is to characterize differences as a threat, or to quote Peter Venkman in Ghostbusters II; “Occasionally you meet a nice one, Starman E .T., but usually they turn out to be some kind of big lizard!”

So, the Bug-Eyed-Monster trope then, is pervasive enough to not only be a stereotype, but to also be a joke. And one only jokes about things they’re kind of serious about deep down, right? In 1969, Swedish literary critic Sam J. Lundwall theorized the persistence of alien invasion stories – specifically from American sci-fi writers – is an evolution which began with the popularization of the western. From his essay “Women, Robots, and Other Peculiarities”:

“The reason for all of this, I believe, can be traced back to the specific American pioneer romanticism… by depicting these aliens as monsters, they can find excuses for their slaughter. The Wild West genre is a typical example of American guilt for the Indian massacres being sublimated into pride of the extermination of these “savages.” And the science fiction pulp era has many similarities with the Wild West stories.”

This may seem like a stretch, but subconsciously, alien invasion stories – particularly if they involve BEMs – are inherently guilty pleasures, and very guilty ones at that. If audiences are super-uncomfortable with a heritage of tons of adventure narrative being built on a tradition of stories about colonists or cowboy conquerors, the alien invasion story sets everything right again: look, it wasn’t “our” fault! They attacked us first! Plus, the “pulp era” Lundwall refers to completely informs a huge chunk of the cinematic science fiction tradition, meaning some of these films – at least those in the Independence Day or War of the Worlds vein — have xenophobia in their basic DNA, whether they’re aware of it or not.

Sublimation of guilt can be part of fiction’s purpose, but of course, some of the alien invasion sub-genre is aware of the clichés and outright fights against the surface notion that the aliens are the bad guys. In the (1960) Harry Harrison novel Deathworld, human colonists on an extraterrestrial planet are overwhelmed by aliens and plant life intent on killing them. Why does this planet want to kill these sweet humans? Well, in a Twilight Zone-esque twist, it turns out the inhabitants of the planet are telepathic, and are only mirroring the basic aggressive tendencies of the humans themselves. In short: “we” made the bug-eyed-monsters come kill us with our own nasty thoughts, because “we” are rotten to the core. Similarly, a film like District 9 flips the script too: even though the “prawns” in this film are conventionally “ugly,” the film hammers home the idea that they’re the victims and the humans are fairly awful.

The original 1951 Robert Wise version of The Day the Earth Stood Still demonstrates the ultimate in human-shaming in the form of a handsome, white male alien “invader,” Klaatu. This guy comes to Earth basically to tell everyone to stop being violent or else. This film remains brilliant because it presciently uses the nomenclature of more pulpy science fiction of the time by giving Klaatu the BEM-like bodyguard in the form of the giant robot, Gort. Gort is what we think of when we think of things-from-beyond-coming-to-destroy-us. The image of Gort could encourage the dimmer demographics to come out and see the film, only to be reminded that this alien invasion story places the blame squarely on humankind, not on the aliens. We’ve done enough damage to members of our own species. It makes sense we would scare people on other planets.

Most telling, all of this revolves around basic aesthetics. In the more popular invasion stories (like Independence Day) aliens that are evil are also ugly and therefore, need to be taken out by humans because our conceptions of what is “gross” are founded in our own biases. Whether it’s the H.G Wells brand of alien or the ones from ID4; stuff like tentacles are your telltale sign you’re dealing with a bad alien.

And yet, in the campiness of a film like Independence Day it’s somewhat apparent that creatures like this seem to be irrationally aggressive. If we don’t take anything about the original film or this new sequel literally, it’s possible we’re dealing with two-sides of the same psyche. Historical white conquerors, whether they were British or American, think of themselves as “cleaner” than those they conquered. With gross aliens, the conquerors are grosser than us, and therefore don’t deserve to take over our planet.

But, non-gross humans are watching these movies, and seemingly, enjoying the spectacle of our landmarks being destroyed in front of us. Alien invasion movies keep getting made for a reason. And perhaps that reason hinges on the one thing most these films haven’t yet given us: our secret desire to see the aliens actually win.

More like this
Science
Sep. 24, 2022
Super-Earths may be the best places to look for alien life
By Chris Impey and The Conversation
Science
Sep. 18, 2022
The Solar System could be littered with alien artifacts — even on Earth
By Seth Lockman and Universe Today
Science
Sep. 20, 2022
New study shows one of Saturn’s icy moons may be extremely habitable
By Kiona Smith
Share: