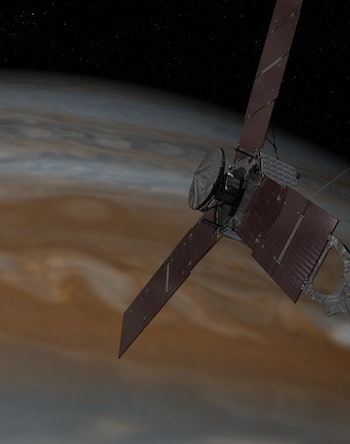 On July 4, NASA’s Juno spacecraft will finally arrive on Jupiter and insert itself into the gas giant’s orbit for what is hopefully a 20-month study that will be unlike anything scientists have ever tried before. It will be the culmination of a five-year, 1.75 billion mile journey for a solar-powered spacecraft the size of a basketball court.

Juno will be tasked with collecting a slew of different data related to Jupiter’s geology and atmosphere. NASA scientists are specifically eager to learn whether Jupiter has a rocky core, why it is enriched with so much carbon and sulfur, whether it has water and oxygen buried in its dense clouds, what the planet’s poles look like, and the exact character of the magnetic and gravitational fields of the planet.

The goals behind the mission aren’t simply to learn more about the volatile gas giant. Studying Jupiter, explained Bolton, will also help shed light on exactly how planets form and what the ancient history of the solar system looks like. “These are clues for us to compare to the sun and understand the early solar system,” he said.

Studying the planet, however, is no walk in the park. “Jupiter is a planet on steroids,” Scott Bolton, principal investigator of Juno from the Southwest Research Institute in San Antonio, told reporters at a NASA press conference on Thursday. Besides being the biggest planet in solar system, Jupiter possesses the strongest magnetic field, spins faster than any other celestial body, and exudes the most powerful radiation outside of the sun itself.

“Everything about it is extreme,” said Bolton. “We’ve put together an armored tank going into Jupiter.”

Juno is composed of a three 25-foot solar arrays sticking out of a central hub. It basically moves by cartwheeling its way through space — and as a result, all of the instruments on board get a chance to peer directly at Jupiter and make observations. The solar arrays can collectively generate about 500 watts of power for the spacecraft — even though they are only receiving 1/25th the amount of sunlight they would normally soak up here on Earth. “The spacecraft is designed to be extremely efficient,” said Bolton.

Jupiter’s radiation — created by its insanely powerful magnetic field, which propels electrons forward and causes them to bounce off one-another at nearly the speed of light — is the biggest challenge the Juno engineers faced when designing and building the spacecraft. “Jupiter has the scariest radiation environment of any planet in the solar system,” said Heidi Becker, Juno’s Radiation Monitoring Investigation lead. “It’s like a spray of radiation bullets” that will amount to the spacecraft getting hit by 100 million dental x-rays in a little over a year.

So, the team developed a radiation “vault” composed primarily of titanium that’s a half-inch thick. All of the instruments onboard are protected by this vault, as well as other protective materials.

The biggest nail-biting moment for the spacecraft will be when ground control initiates the main burn aimed at getting Juno well within Jupiter’s orbit while ensuring it stays at a safe distance from the atmosphere’s more violent lawyers.

“It’s a one-shot deal,” said Bolton. “Everything is riding on it.”

One of the most unique aspects about Juno is the JunoCam: a camera onboard that will show some of the most up-close images of Jupiter directly to the public. Visitors to the JunoCam website will be able to vote and decide where the camera should be pointed and what kinds of pictures it ought to take, as well produce those images shot by the camera. “It’s really a public camera,” said Bolton.

The entire is thrilled that to finally be just a stone’s throw away from the Jupiter. “We’re going literally where no one has gone before,” said Bolton.