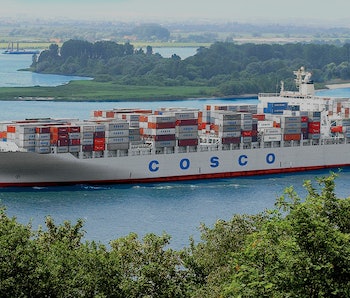 The first batch of a new generation of huge containerships has set sail from Asia for the Panama Canal following renovations that have opened the door to ships carrying nearly double the maximum cargo as the original canal.

The Panama Canal now accommodates ships carrying up to 10,000 teu, a nautical measurement of size, just about two times the 5,100 teu permitted before the renovations. Termed Neopanamax vessels, the enormous ships are set to entirely displace the previous generation of containerships that have already seen their value plummet in anticipation of the new era of shipping.

China’s COSCO shipping earned the distinction of sending the first ship through the canal in an industry-wide raffle. The company’s 9,443 teu “Andronikos” vessel, renamed Cosco Shipping Panama in honor of the historic transit, will pass through the widened gates of the canal on June 26, Panama Canal Day, at a ceremony celebrating the crossing. At least five more of the new ships have set out from Asia in recent days and are due to arrive at and pass through the expanded canal between June 30 and July 8.

The inauguration of the expanded Panama Canal comes a full two years after the initial target date for completion. Engineers on the project were required to contend with the massive renovation project at the same time as the canal remained operational as one of the key transit points in global shipping. Now that the project is complete, it is set to upend the industry, almost instantly driving dozens of containerships that have served as the workhorse of the industry for decades into extinction.

Containerships capable of carrying no more than 5,000 teu are already finding themselves with little business. The Neopanamax class can provide lower costs, and thanks to intense speculation on the Panama Canal, plenty are already fit for service. The best hope for the older class is that they will replace the much smaller 1,000 teu feeder ships that transport cargo into shallower waters. For ships that were only recently inspiring the world with their awesome size, such small-time work would seem an anti-climatic end to their careers.

The original Panama Canal opened about a century ago on August 15, 1914, just as World War I was getting underway. By allowing ships to pass through Central America and not have to swerve around the entire Southern Continent, the Canal revolutionized global shipping. With the invention and standardization of containerships in the 1950s, the canal began to witness greater volumes of trade that fed discussion of ways to boost capacity even further. A Chinese attempt to drill a canal through Nicaragua is currently on the fritz as the major investor lost much of his fortune in the Chinese market crash of the past year.

The new breed of Neopanamax vessels are at least three football fields in length and 107 feet in beam (width). As Rose George wrote in the title of her book on the shipping industry, these ships will carry “Ninety Percent of Everything” you touch and use on a daily basis. Even for a world that has become reliant on international trade, Panamax is a major upgrade.