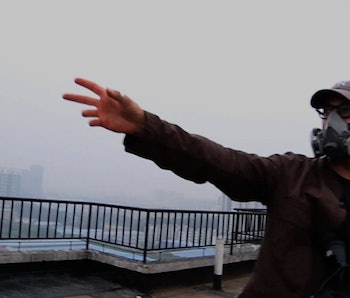 Josh Fox, a man famous for starting a fight with the fracking industry, just set his sights on a even bigger target: climate change. Fox, who gain international recognition for Gasland and Gasland II, is back with a new film about climate change that isn’t really about climate change at all. How to Let Go of the World and Love All the Things Climate Can’t Change is a call to action that foregrounds what is worth saving and takes climate change as a given. It’s a new approach to what’s become a genre unto itself, the environmentalist plea.

Fox tells Inverse his approach was about thinking small. He’s giving up on the idea of saving the world from climate change and deciding to find the climate change battles close to home instead. “When you get into the mindset of saving the world, you kind of miss the things that are in front of you,” he says. “It’s such an overwhelming and grandiose and ridiculous notion to think that you could save the world.”

And the world may not need saving. The planet has gone through more extreme and sudden changes than this one. Life, in some form, will find a way go on. It’s the quality of that life that people are fighting for. The key, says Fox, is not to lose sight of the trees for the forest.

Over the course of the film, Fox travels around the world, meeting with activists fighting battles in their own communities and neighborhoods. The journey is often emotional, sometimes dramatic, and even funny. It’s about finding the humanity, the love, that fuels the fight.

“When people look at climate change, they get paralyzed, because it’s so huge, and it’s so upsetting, that when you hear about it, you just kind of go numb,” says Fox. The result can be like a ping pong ball moving back and forth between depression and despair, he says. “What we’re trying to say is, it’s OK to go through the emotions. It’s OK to go through the process of grief — because when you take emotions off the table, you just become numb, and when you become numb, you don’t act.”

So feel that anger, feel that sadness — and they go out and join a community of people trying to do something about it, the film urges. Even when the war against climate change is an unwinnable won, the fight still matters. If you take up the battle, you might even find something surprising there: joy.

How to Let Go of the World and Love All the Things Climate Can’t Change will screen on June 27 on HBO.