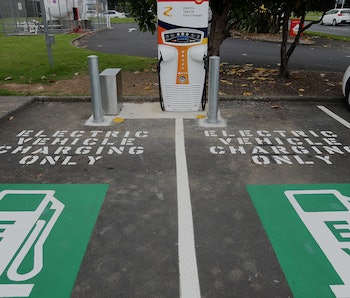 Germany is known for some of the most ambitious carbon-emissions goals in the world, with the country of 80 million already committed to slashing emissions by 80 to 95 percent by 2050. These goals demand immediate, aggressive action, and now one German minister is arguing that the only way that they are feasible is if Germany can completely shift to emissions-free cars by 2030.

The United States actually has similar long-term goals, with President Barack Obama calling for an 83 percent carbon emission reduction by 2050, but few are talking about dramatic vehicle emissions measures. Sure, companies like Tesla are doing better than expected at encouraging even somewhat middle-class drivers to buy emissions-free vehicles. But without direct action from the states and probably the federal government itself, we should just kiss our emissions dreams goodbye.

The good news is that if Germany makes the jump to emissions-free, governors in the United States will finally have a precedent for the unilateral action. The comparison between a national commitment and the action of a single U.S. state may seem imprecise, but the similarities are greater than one might think. Germany is equal in population to just two Californias or four Floridas, and both California and Texas are larger in terms of geographic area than Germany.

Of course, individual states have not established carbon-emissions goals, as it is difficult to separate the contributions of in-state residents compared with that of those who are in from out-of-state. But there is nothing stopping a state like California from mandating state registered vehicles be emissions-free from 2030. California already has the largest number of electric vehicles in the country, with over 400,000 registered as of March, 2016, and state officials have pledged to hit at least 1 million by 2023. The only danger is that people desperate to cling to their fossil fuel emitting cars would exit for smoggier skies.

California residents alone purchased 1.8 million vehicles in 2014. By requiring that all of these vehicles be emissions-free, a single U.S. state can also radically shift the nationwide market for the green vehicles. Forcing auto manufacturers to make investments in the new technology, costs would likely fall, and other states would face fewer barriers when considering such a mandate. Though it’s tempting to consider the risk that manufacturers might ditch emissions-free markets altogether, it’s probably more likely that the early adopting state will become the homes of the young industry’s production.

It would take guts for a state legislature to storm out into the future of emissions-free cars on its own, but as Germany is showing us, it’s undoubtedly the direction of the auto industry as a whole. California should take the lead, and the rest of us will follow. It’s only a question of whether we will be willing to make the necessary adjustments before we break the atmosphere for good.