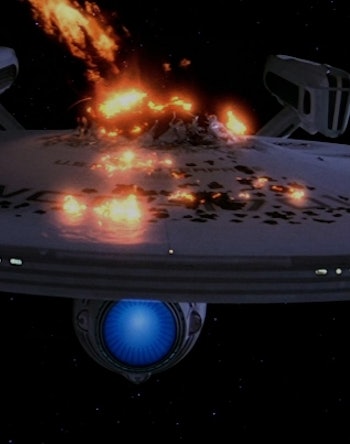 So many of Spock’s problems could have been solved if somebody had just shot him a text.

In the classic 1967 Star Trek episode “The Immunity Syndrome,” Spock flies a shuttlecraft into a giant space amoeba. While talking to his buddies on the Enterprise, the call drops. Captain Kirk and company freak out for quite a while because nobody can get ahold of Spock (Leonard Nimoy) and they worry he’s dead. This same thing happens in the opening of 2013’s Star Trek Into Darkness when Spock (Zachary Quinto) is hanging out inside of a volcano; static interferes, communication is lost, and Uhura (Zoe Salanda) gets sad. Being a 23rd century communications expert, Uhura should know that text messages require less bandwidth and therefore are sometimes more reliable than voice calls, particularly when there’s interference. It’s unlikely that the Enterprise is using an old-school circuit-switched network for its calls, so why didn’t Uhura just text Spock ? Easy: because the Enterprise in Into Darkness is still based on the 1960s idea of advanced technology.

In fairness, nitpicking Star Trek on its scientific inaccuracies is a little like shooting dead fish with a self-aiming laser-beam. Don’t get anyone started on why there aren’t seat belts on the Starship Enterprise. Still, the text message thing is emblematic of the aesthetic retro-future sci-fi baggage which prevents the general notion of Star Trek from becoming new and vibrant today. Both the historical and technological aspects of Star Trek are forced to adhere to an outdated idea of what the future would be like in 1966, or even 1996, which severely limits the kind of Star Trek we could potentially receive in the 21st century. With a new series coming in 2017, showrunner Bryan Fuller and his gang should throw out the previously established continuity and start from scratch.

Now, if you like Star Trek even a little bit, you might be insisting that this has already happened; not only with the J.J. Abrams 2009 reboot, but also in 1987 with Star Trek: The Next Generation. Surely, both of these iterations allowed for updated technology and contemporary political ideas to revitalize Star Trek and bring it into a variety of new eras, right?

Superficially, this is kinda true, insofar as the Starship Enterprise in Star Trek: The Next Generation felt slightly more realistic than the ‘60s Enterprise, and the 2009 Enterprise looks like an Apple Store from 2009. But strictly speaking – even considering the divergent timeline of the Abrams movies –all Star Trek stuff relies on 1960’s version of the future established by the original show. This means, if you’re writing Star Trek now, you’re writing about a future in where Earth’s history went like this: there were genetically-engineered assholes (like Khan) who started a “the Eugenics Wars” in the 1990’s, suspended animation sleeper ships were launched into space in the early 2000s, a global nuclear holocaust happened sometime in the middle of the 21s century and Vulcans landed on Earth on April 5th, 2063. From the angle of writing compelling science fiction, these are actually some pretty serious shackles.

Various iterations of Star Trek have tried to nobly write-around their own convoluted future history. In the 1996 Star Trek: Voyager two-part story “Future’s End”, the crew time-travels back to Earth 1996 where they encounter Sarah Silverman and a version of their planets past that doesnt match up with old-school Star Trek faux-1990s. The episodes vaguely infers that illegal time-travel can be blamed for the discrepancy, but no one actually mentions the “Eugenics Wars” which are supposed to be raging. The Star Trek novelist Greg Cox attempted to reconcile real 90’s history with the rise of Khan and the Eugenics wars in a series of novels. Here, all of Star Trek’s fake version of the 90’s history did happen, it’s just that it was series of secret wars and not stuff reported by the news. It seems the writers of TV Star Trek struggled with this all the time. Deep Space Nine writers like Ron Moore seemingly to wanted to honor the old continuity while Voyager producer Jeri Taylor [said]( http://memory-alpha.wikia.com/wiki/Future%27sEnd(episode) that including 1960s future projections of the 1990s “would just be kind of strange.”

But Star Trek’s inconsistencies have only become stranger since then. From the prequel TV show Enterprise to the existing run of quasi-reboot films, Star Trek continues to be a popular and divisive nerd franchise. But could it ever be a cool science fiction thing again? Thinking about Star Trek canon stuff can make any new Star Trek feel like old Star Trek, but imagining a truly new Star Trek: one based on the world we are experiencing right now seems both really exciting, and highly unlikely. Would CBS would allow a truly radical and new version of Star Trek to exist on the air?

It would be great if they did. If the new Star Trek show wasn’t forced to make the Enterprise look anything like the old versions of the ship, you’d already feel like something interesting was happening. What if they threw the artificial gravity thing away, and made a version of Star Trek where everybody had to strap themselves in all the time? The challenge would just be this: think of all the technology we’ve got now, pretend that everything in the 23rd century on Earth is fine and we’re visiting over planets. What would that look like?

The only stipulations of this hypothetical new show is they have to call it Star Trek, the ship has to be called the Enterprise, there are aliens called Vulcans, and they visit other planets. That’s it. No other baggage would be required. Don’t want “beaming” on this version of Star Trek, because you’re trying to make it more realistic? Fine. Go for it. Would this totally hypothetical new version of Star Trek look more like Gravity or Interstellar than Star Trek? Maybe. And how cool would that be? It’s a show about space exploration for crying out loud. Why doesn’t it look like real space exploration?

Overwhelmingly, rumors persist that the new Bryan-Fuller run Star Trek show will take place in old Star Trek continuity, sometime in between the original series and The Next Generation. It should be noted that none of this has been corroborated by anyone actually working on the show. Plus, when I briefly spoke to Nicholas Meyer (a longtime Star Trek director and writer who has joined the new series) earlier this year, he called the new Star Trek “innovative,” and “different.” Could that indicate that it also might be more “real?” He did mention Bryan Fuller had an affinity for his film, Star Trek VI: The Undiscovered Country, but hopefully that’s just the philosophical stuff and not the canon-stuff? Both Fuller and Meyer have worked on Star Trek before. Would they really want all that baggage?

If Bryan Fuller does decide to go with an all-new canon — or rather, if CBS lets him — the voyages of Starship Enterprise could be full of something that’s been absent from Star Trek for a very long time: an actual speculative vision of the future.