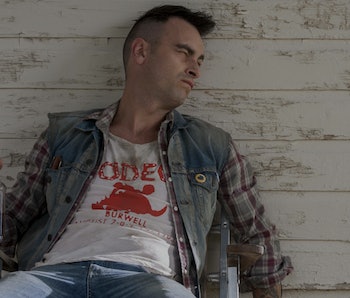 As the sun rose over a small Texas town for the first time in the pilot episode of AMC’s Preacher, newcomers to the life and times of Jesse Custer were startled by the shocking power of the show, while fans of the Garth Ennis’ comic series were thrilled at how well the show juggled the tone of the original while putting a fresh face on the story elements. In short, it’s a really good show.

In a program that’s filled to the brim with great storytelling and incredible performances, there’s one actor that has especially stuck out in the first few episodes: Cassidy the vampire, played with gleeful abandon by Joseph Gilgun. Thanks to his bizarre happy-go-lucky attitude, the vampire is the easiest member of the core cast to like, despite of the fact that he’s a flat-out psycho. Rolling Stone called Gilgun’s Cassidy, “a jolt of unhinged charisma,” a description that’s right on the money.

Devoted sci-fi fans, however, may already have plenty of experience watching Gilgun run amok thanks to his inspired turn in 2012’s Lockout as the rampaging member of a prison riot … in space!

‘Lockout’ If I’m Being Honest

On the whole, Lockout is a totally watchable sci-fi action flick that breaks absolutely no rules whatsoever. The story hews pretty closely to the plot lines of genre favorites like Escape from New York, except, you know, in space. After the President’s daughter is trapped in the world’s first space jail (Maggie Grace, who, as we all know, has a real flair for getting taken hostage), a disgraced CIA agent (Guy Pearce, who was totally framed) is sent into the facility to get her back. Meanwhile, a group of convicts lead by Hydell (a cataract’d Joseph Gilgun) is trying to find said daughter and secure their release from the prison.

In short, don’t expect a ton of twists and turns from the plot. It’s so rote, in fact, that John Carpenter sued the makers of the film alleging plagiarism, and he won. So, forgiving that it’s essentially a rip-off of another film (Lockout is the first case of intellectual theft in Hollywood history), Guy Pearce’s action flick really isn’t half bad.

The story is solid insofar as each character has well-defined motivation, the action is pretty kickass (if a little low budget) and the actors are all way too talented to be in this film.

It’s About Those Leads

What sounds like a totally predictable action film is made imminently more fun by the performances of its two leads, Pearce and Gilgun. Pearce plays a slightly grittier character than usual, as he’s generally relegated most often to the role of the in-office weasel. Pearce clearly enjoys playing the tough guy, spitting blood from his mouth and spouting one-liners like he’s loving every minute of this shit.

It’s Gilgun, however, who really owns Lockout. He may not have as much screen time as Pearce, but his one-eyed caged animal is a threat that lingers over the entire film. Hydell is more manic than Cassidy (if that’s possible) and his intent is more nefarious, but his persona is injected with the same coy menace that’s deeply infused into Cassidy’s core.

Gilgun’s character is deeply enjoyable to watch because he has the benefit of being a thorn in the side of every character in the film, no one more so than his older brother, Regan, the level-headed (at least, by comparison) leader of the rebellion.

As the film’s chaotic evil, Hydell is almost solely there to make the film more unpredictable and, by extension, a hair more exciting. That’s a pretty tough task when you consider that the basis for the plot was hardly new when John Carpenter sent Snake Plissken into Manhattan after the President. Perhaps the most shocking thing is that Gilgun is largely successful. In his hands, Hydell becomes a twitchy, disintegrating animal who’s enjoying the fall a little too much. He manages to be captivating without saying a word.

The part takes Gilgun all over the emotional map. Hydell goes from smiling to screaming to weeping over the length of the film and every phase of the journey is a viewing pleasure. It’s a great glimpse at the depths and emotional range of which Gilgun is capable. He’s so dialed into the role that it’s a little unnerving. His face is a mask of writhing emotions that both grounds his insanity in a terrifying reality and lends an earned randomness to his actions. It’s a performance that stands alone in an otherwise enjoyable (if mediocre) film.