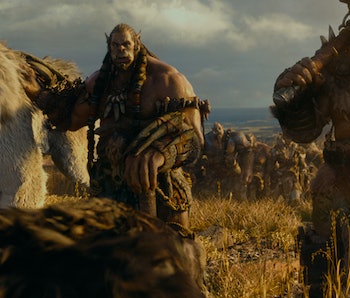 Warcraft: The Beginning was a massive undertaking for many reasons, but there was perhaps no feat more gargantuan in the film’s making than the special effects. From creating orcs that could interact with humans onscreen to making sure that every hair on said orc’s head was in place, CGI was a big part creating the world of Warcraft. In a short documentary, BBC’s Ali Plumb spoke with the actors, director and ILM experts who had a hand in bringing Warcraft to life.

You can’t have Warcraft without orcs, and when you’re adapting something as massive and popular as the Warcraft games, your orcs need to look damn good.

“The orcs were our biggest challenge,” ILM Visual FX Supervisor Nigel Sumner told BBC, “creating as real, as human digital actors that could interact, act and perform believably on the screen.”

“The physical movements of an actor, both their body and their face, can be captured and digitally set onto a matrix and that matrix can be used to drive a computer-generated character,” said Warcraft director Duncan Jones.

It wasn’t just walking around and lifting props that led to the movement, though. The orc actors went through “orc school” with movement coach Terry Notary, who taught the actors how to believably pull off orc movements and mannerisms, from giving the characters a sense of weight to accommodating their unique physiology in their movements.

There’s a lot of hair in Warcraft, and a lot of it had to be created digitally for characters like the orc. Because of the incredible demands that stemmed just from the hair, ILM created a new software which they call “Haircraft.”

“Haircraft was designed especially for Warcraft, so it gave us the flexibility to get a lot of different things out of the box, such as braids, hairstyles, eyebrows, costume fur,” ILM Technical Director Gaelle Morand told BBC. “When I look at a hairstyle, for example like on Durotan, there are probably several hundred thousand strands here to make up his hairstyle alone, never mind the body fur, never mind the costume fur.”

Its clear that CGI has come a long, long way in a relatively short period of time. We’ve gone from creepy humanoid renditions that landed us smack dab in the Uncanny Valley to creating digital actors and orcs that look real, right down to the hair on their heads. But CGI’s still advancing, and its future promises some pretty incredible (if slightly alarming) contributions to the world of film.

As CGI gets better, it becomes harder and harder to distinguish between what’s “real” and what’s been digitally rendered. That gap is closing, and as it does, we just might see actors who find immortality through CGI by getting themselves scanned so that they can play parts after their bodies are no longer suited to said parts.

“Movies have done it in interpretive ways,” Sumner told BBC, “but I feel we’re on the cusp of seeing fully digital characters that you wouldn’t know are digital on the big screen.”

Even so, Warcraft wasn’t all CGI. There were a great number of practical effects, stunts and real sets that went into making the world of the film feel like more than just a computer-generated landscape.

You check out the entire documentary on BBC’s iPlayer in the UK.