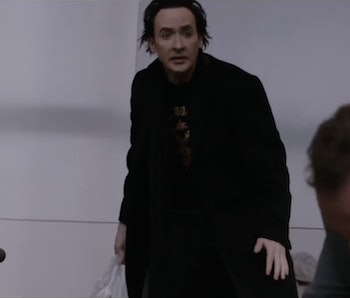 The big-screen adaptation of Stephen King’s ambitious zombie novel Cell, hits (certain) theaters on July 8th. And in a new clip from the film released this morning, it’s clear that director Tod “Kip” Williams (Paranormal Activity 2) has kept quite a few things from King’s novel — though the initial carnage will take place in an airport, rather than in line for an ice cream truck.

The clip is full of shocking virus-stunts, including a man biting into a dog, another man stumbling out of a bathroom with his pants around his ankles, and a girl smashing her head into a stone wall and turning to laugh into the camera. The real star of the footage, however, is John Cusack, whose face in reaction shots to all the gore barely registers concern. He’s also deathly pale, and dressed in a black trench-coat, which adds to the clip’s peculiarity.

The screenplay for Cell was written by Stephen King, with revisions by Adam Alleca. Though many of King’s novels have made it to film and TV adaptations, he’s rarely asked to pen screenplays himself. Most notably, he wrote the film Pet Sematary, an episode of The X-Files, and the entire, strange mini-series The Stand.

Considering King’s adaptations of his own work typically lean toward campy, we’re confident Cell is going to be a pretty fun ride. Cusack’s co-star, Samuel L. Jackson, hasn’t even appeared in a clip yet, so we still have something to look forward to, before the film premieres.