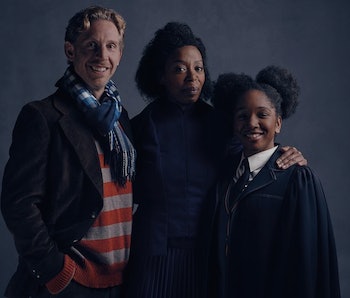 Spoilers ahead, not that you should care.

Last night in London, a little stage play started running previews called Harry Potter and the Cursed Child. If you were a time-traveling theatre critic from the 1980s, you were probably really confused. Everyone else however, freaked out, and as reported by Time Out London, audiences and Potter fans have responded overwhelmingly in the positive, some even declaring it “the best show ever.” (Really!) However, nobody is revealing anything about what happens in the play.

Well. Not nobody. There are plenty-o-Harry Potter and the Cursed Child spoilers out there. No plot twists are unveiled, nor are there any details on par with the infamous 2005 revelation that “Snape Killed Dumbledore,” in the novel Harry Potter and the Half-Blood Prince. Most of these articles are respectful of J.K. Rowling’s desire for everyone who has seen the play to #KeeptheSecrets and not let out any spoilers. Still, it didn’t prevent Rowling from calling out the website Hypable as a villain, even going so far as to equate it to the character Wormtail, who as everyone knows, is a guy who turns into a rat and is super gross.

Did Hypable — or any other websites, for that matter — really do anything wrong? Because Harry Potter and the Cursed Child is effectively a direct sequel to the final Potter book — Harry Potter and the Deathly Hallows — it’s fairly natural that those who can’t run out and see the play in London are super excited to discover what’s happened to their favorite wizards.

Unlike the previous decade’s version of Potter-mania, not everyone around the globe can wait in line at midnight at a bookstore and speed-read the novel. There were basically no advanced review copies of Harry Potter books given to booksellers or critics for exactly this reason. While it’s true that the script for Harry Potter and the Cursed Child will be available in book form on July 31, some fans seemingly can’t wait.

In 2005, there was every reason to believe that the revelation of Snape’s “treachery” actually fueled excitement for Harry Potter 6; so why wouldn’t learning about Hermione’s job or the social status of Harry’s son get you pumped for Harry Potter 8?

Since 2011, a few studies have been making the rounds that actually suggest spoilers don’t really decrease people’s enjoyment of fictional stories. And, as recently as last month, UC San Diego psychology professor Nicholas Christenfeld basically reclassified “spoilers” as “enhancers,” meaning readers and audiences might be more excited about various stories if they do already know what’s coming.

Get mad at spoilers all you want. But they might not be Wormtail if people are even more excited about Harry Potter and the Cursed Child than ever before. Oh, and by the way, spoiler (enhancer?) alert: Hermione is the Minister of Magic now, which means she can erase your memory of you ever having read this in the first place.

More like this
Entertainment
10 hours ago
How Werewolf By Night morphed into Marvel’s most exciting project yet
By Eric Francisco
Entertainment
12 hours ago
Will Agatha: Coven of Chaos feature one of Marvel’s oldest (and scariest) villains?
By Richard Newby
Entertainment
9 hours ago
Who is Hulk King? She-Hulk could be setting up a Secret Invasion villain
By Dais Johnston
Share: