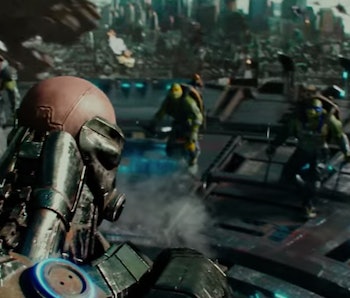 The Teenage Mutant Ninja Turtles franchise is a lot of things, but “strictly realistic” is not one of them. In a film that features super buff half-shelled heroes, it’s easy to write off much of what happens as the stuff of science fiction or fantasy. This is especially true of Krang, a villain who consists of a brain with eyes, which controls a massive robotic body. There’s no way something like that could function in real life, right?

When we reached out to Mikhail A. Lebedev, who works in neurophysiology and brain-machine interfaces at Duke University, we expected to hear that Krang’s brainy robot setup was entirely the stuff of fiction. But that’s not what happened.

As it turns out, the science behind Krang is totally sound, even if we’re not exactly close to making it happen IRL.

Krang’s setup isn’t terribly dissimilar to the brain-machine interfaces that Lebedev uses in his research. By connecting monkey brains to machines (like simple robotic arms that can send and receive signals, for example), Lebedev’s research has shown it’s possible to control machines using only impulses from the brain.

For now, the capabilities of these brain-machine interfaces can’t quite give us the fine control we’d need for something like Krang’s self-contained and ambulating super villain brain-in-a-box.

“Currently we cannot do really fine information exchange. We can send simple messages and receive simple outputs,” says Lebedev. That doesn’t mean it’s impossible, though. “In principle,” Lebedev says, “as this technology develops, this can become feasible.” So what would we need in order to make a machine that’s capable of keeping a brain alive and working, Krang-style?

“There should be some kind of blood supply and nutrient supply — which is a separate problem — also, this brain should be protected from infections, so the box should be really sterile to keep the brain safe.” The brain needs a constant supply of oxygen, as well as whole lot of glucose. Lebedev tells us that the brain consumes around 30% of the body’s energy, so we’d have to make sure it’s got plenty of glucose to keep it firing on all cylinders. It’s also going to need the chemicals typically found in the bloodstream, as those chemicals are what the brain uses to exchange information between neurons.

In order for our Krang-bot to work, it’s also important that we keep this brain busy and stimulated, lest it fall asleep on us. “It’s very important that this brain receives sensory information from this external body,” says Lebedev. The brain goes to sleep when it doesn’t have anything to do, so making sure that our robot body is capable of sending stimulation to the brain is key.

So now that we’ve got the specifics of our robot body worked out, how far are we from seeing something Krang in the real world? In some ways, remarkably close. In others, not so much.

One of Lebedev’s recent studies found success in controlling wheelchair movements with impulses from a monkey’s brain without touch. Sure, the movements weren’t precise or fine-tuned, but it’s proof of concept. The science is there and the theory is sound.

That said, the monkey brain was still in the monkey, which brings us to the part of the equation that removes us a bit further from the brain-in-the-box reality.

It’s not exactly ethical to take a working brain out of a monkey and hook it up to a machine. And, because it’s considered unethical, theres not a lot of research revolving around how to do it. No research means that we’re not likely to see great strides here anytime soon.

The part of the problem that scientists can work on is the capabilities of the control that comes directly from the brain. By observing neurons at work, we can get a better understanding of how impulses work and how those impulses translate to direct control of an external object. The challenge here is that the brain is incredibly complex, with over 50 billion neurons at work.

And so, Lebedev observes these neurons in smaller samples to get a better understanding of how these neurons work and what they do. There are a number of ways to observe brain activity — electroencephalograms (EEG), magnetic fields, monitoring blood supply — but they all pale in comparison to going directly to the source.

“There are many ways, but inserting the electrodes directly into the brain is by far the best way to do this communication with the brain,” says Lebedev.

We aren’t going to see a brain-in-a-box robot villain like Krang wandering the streets anytime soon, but the science behind the famed TMNT character is surprisingly sound. So keep an eye out.

More like this
Gaming
6.22.2022 3:00 PM
TMNT: Shredder's Revenge is the retro beat ‘em up of your dreams
By Robin Bea
Entertainment
4 hours ago
25 years ago, Nic Cage made his most explosive sci-fi movie ever — it was almost even better
By Jake Kleinman
Entertainment
3 hours ago
Marvel leak reveals a groundbreaking new god in Black Panther 2
By Dais Johnston
Related Tags
Share: