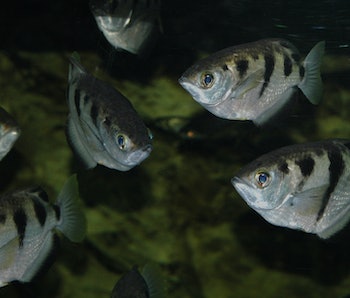 Your pet fish is getting a little tired of all the short term memory jokes. The “memory of a goldfish” cracks don’t even make sense — and science can prove it. In fact, researchers have amassed significant evidence that at least one species of fish can tell human faces apart, a task that many thought would require sophisticated neural equipment that fish don’t possess.

Researchers at Oxford University and University of Queensland trained archerfish to recognize a particular face out of a set of 44, and avoid spitting in its direction. Archerfish use a stream of water to destabilize prey, and the scientists rewarded the fish for spitting in the right direction when two faces were presented on screens over the tank. The results were published in Scientific Reports.

The researchers wanted to investigate whether human face recognition is innate — requiring a specialized brain system — or learned using brain systems common to many animals, like pattern recognition. Other studies have shown that some animals — including sheep, dogs, horses, cows, and pigeons — can tell faces apart, although the species tested generally possess a neocortex and have been socialized over time among humans.

This fish study doesn’t prove that humans don’t have special face-recognition machinery. But it does show that, even without a neocortex, some fish have complex pattern recognition skills that can be applied to faces with training. The fish succeeded in spitting towards the correct face with an average accuracy higher than 80 percent, even when the faces were presented in black and white, with uniform brightness and enclosed by an oval frame such that only subtle differences in facial features could be used to make the distinction.

The scientists did not test if the fish could recognize the same face from a slightly different angle, or with a different expression. It could be that this task does require neural processing that is simply too sophisticated for archerfish to complete. But don’t be too surprised if that turns out to be false: fish, after all, live in a dynamic three-dimensional world, where they have to tell friend from foe from all angles and in any lighting condition.

So, be good to your pet fish. She just might be watching you.