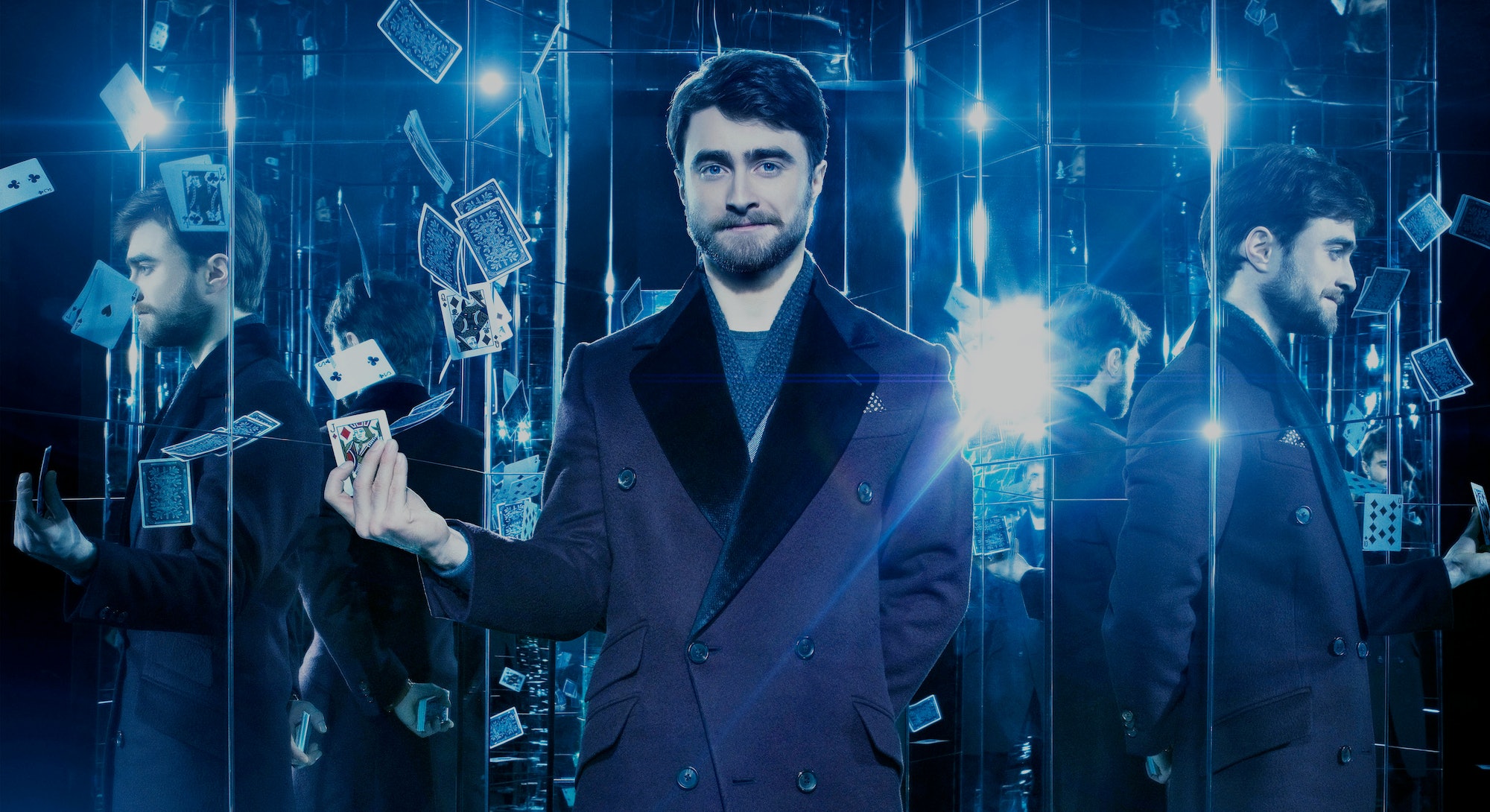 Three years ago, Now You See Me offered a fantasy heist movie powered by the aesthetics of real-life stage magicians in the vein of Harry Houdini, Criss Angel, or David Blaine. As evidenced by this weekend’s release of Now You See Me 2, this created in a bankable franchise – seemingly running on magic. Both the original and the sequel, in fact, call on two distinct types of magic: the kind you’d call “tricks,” and kind you’d cast as “spells.” They’re very different and yet, more than we might first realize, also very related.

The addition of Daniel Radcliffe — Harry Potter himself — in Now You See Me 2 has been met with arched eyebrows and chuckles; the boy wizard in a contemporary magic heist movie is a smart use of irony. The response is more or less the opposite of how everyone would react if Criss Angel were suddenly starring in the new J.K. Rowling-penned stage play, Harry Potter and the Cursed Child (hint: people would be mad).

A cursory Googling of “Criss Angel+Harry Potter” immediately reveals no less than three spoof videos. The “joke” in each video is identical: the kids from Hogwarts can do legit magic and Criss Angel is a lame phony. Generally speaking, contemporary culture prefers spell-casting badassery to psychological illusions, but that doesn’t mean trick-magic is stupid. In fact, the popularity of fantasy right now is the only thing creating that bias.

In a pivotal scene in the first episode of the SyFy series The Magicians (adapted from the Lev Grossman novel trilogy of the same name) Dean Fogg (Rick Worthy)—annoyed with Quentin Coldwater’s (Jason Ralph) busting-out some tried-and-true pick-a-card-any-card-shtick— demands Quentin do some real magic. Here, real magic means levitating the cards with your mind instead of tricking people into thinking you’ve pulled the ace of club out from behind their ear. While this brand of magical magic is impossible, in 2016 it’s socially more acceptable than card tricks because from Game of Thrones to Harry Potter everyone likes fantasy.

But, that’s a fairly recent development. Writing for Time in 2014, Lev Grossman outlined fantasy’s comeback in the past few decades or so, noting that back in the 80’s fantasy wasn’t cool and that “…to be a fantasy fan was not to be a good, contented hobbit, working his sunny garden and smoking his fragrant pipeweed. It was to be Gollum, slimy and gross and hidden away, riddling in the dark.”

Some of the blame for fantasy’s closeting could be placed on a variety of Christian hysteria surrounding the so-called satanic” nature of Dungeons & Dragons in the 1980’s. But, academic snobbery might have prevented a widespread acceptance of fantasy, too. Writing in The Magician’s Book: A Skeptic’s Adventures in Narnia, Laura Miller recounts her experience with a pervasive bias from adults regarding her childhood interests in books “with magic” being labeled as “escapist and therefore trivial.” She argues — in part — that a majority of this thinking probably comes from modern/contemporary literary criticism, which places a disproportionate amount of value on realism.

However, telling compelling stories — fantasy or otherwise — isn’t exactly the same as tricking someone into believing the “realism” of an illusion. Nelson Lugo, a New York-based magician and star of a one-man show titled Gathering: The Magic, tells me that “when it comes to stage magic, there’s a momentary unwilling suspension of disbelief. In a movie or a play no one truly believes that those actors are getting shot and dying or falling in love.”

For Lugo, it’s all fake magic, which in a sense, is also why it’s real. “To me there is no real difference between loving ‘performance magic’ and ‘fantasy magic,’ he says. “I am a huge fan of Harry Potter and Lord of the Rings. These fandoms [stage magic and fantasy] are not mutually exclusive.”

Last February, writing for The Atlantic, Cari Romm investigated the field of “neuromagic,” which primarily looks at the psychological underpinnings of how and why people might be “fooled” or want to be fooled by magic tricks. These kinds of mind-games of misdirection are central to movies like Now You See Me and also necessary sociological facts which allow David Blaine to do his job. Still, as Romm points out A trick is not a lab experiment; it’s an inherently social act, one that gets its life from the dynamic between magician and audience.

“People who appreciate what I do understand that it is a performance art, Nelson Lugo says. This distinction is perhaps the best intellectual way to reconcile the two types of magic; one exists inside of art, fueling its story with a familiar concept. The other—from the common card trick, to Now You See Me style death-defying escapes are art. The only reason you might prefer Harry Potter brand of magic right now is because that brand of magic is more popular. But tricky illusionist magic has been popular for much longer.

The early filmmaker Georges Méliès’s made magical stuff likeThe Four Troublesome Heads; a short film which looks like a staged magic show, but accomplishes illusions you could never achieve on stage. Here, the link between the two kinds of magic are clear: stage magic is an antecedent of fantasy magic. You can’t have the latter without the former. Accordingly, Quinten Coldwater wouldn’t have been able to perform “real” magic in The Magicians without doing card tricks first. Which means it makes perfect sense that Daniel Radcliffe is in Now You See Me 2. Symbolically, magic is going back to school.

Now, if we really want all schools of magic to intermingle, lets get going on a petition for a David Blaine cameo in Fantastic Beasts and Where to Find Them and get Criss Angel his deserving starring role in the Harry Potter play.