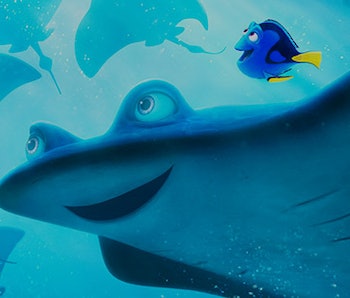 Two weeks from now, Disney is poised to get its potential third billion-dollar movie of the year when Finding Dory opens in theaters. Movies marketed to kids tend to rake in oodles of cash regardless of how they’re received, but Finding Dory isn’t just some kids’ movie — it’s the sequel to the beloved Finding Nemo, the second-biggest Pixar movie ever after Toy Story 3.

Finding Dory will be the third billion-dollar movie because Zootopia hit that milestone this weekend after three months in theaters. (Captain America: Civil War was the first to join Disney’s three-comma club this year.)

The official plot of Dory, released back in March, goes like this:

Disney/Pixar’s Finding Dory welcomes back to the big screen everyone’s favorite forgetful blue tang Dory (voice of Ellen DeGeneres), who’s living happily in the reef with Nemo (voice of Hayden Rolence) and Marlin (voice of Albert Brooks). When Dory suddenly remembers that she has a family out there who may be looking for her, the trio takes off on a life-changing adventure across the ocean to California’s prestigious Marine Life Institute, a rehabilitation center and aquarium. In an effort to find her mom (voice of Diane Keaton) and dad (voice of Eugene Levy), Dory enlists the help of three of the MLI’s most intriguing residents: Hank (voice of Ed O’Neill), a cantankerous octopus who frequently gives employees the slip; Bailey (voice of Ty Burrell), a beluga whale who is convinced his echolocation skills are on the fritz; and Destiny (voice of Kaitlin Olson), a nearsighted whale shark. Deftly navigating the complex inner-workings of the MLI, Dory and her friends discover the magic within their flaws, friendships and family.

Finding Dory marks the return to animation for writer/director Andrew Stanton, whose celebrated career took a controversial detour after he directed the infamous live-action adaptation John Carter. That 2012 wannabe blockbuster is still thought of as an unfortunate box-office bomb despite Stanton’s meticulous Pixar-enabled eye for design and detail.

2015’s Inside Out, from the makers of instant classic Up, seemed to right the ship a bit, eventually nabbing the Academy Award for Best Animated Feature. But 2015 also saw Pixar’s first relative box-office bomb. Making only just over $330 million worldwide, The Good Dinosaur came and went and left the good name of Pixar slightly tarnished again. Finding Dory is coming along to try and right a few wrongs.

Will Finding Dory get Pixar back to the glory days, reaffirm Stanton’s obvious talent, and score Disney a third billion-dollar movie at the box office this year? Only time will tell.

More like this
Science
6.24.2022 1:30 PM
The best post-apocalypse movie of the century reveals a dark debate over humanity’s future
By Tara Yarlagadda
Entertainment
6.22.2022 11:00 AM
20 years ago, Disney's most chaotic sci-fi experiment ever paid off
By Rebecca Long
Entertainment
6.29.2022 11:00 AM
Marvel leak reveals a groundbreaking new god in Black Panther 2
By Dais Johnston
Related Tags
Share: