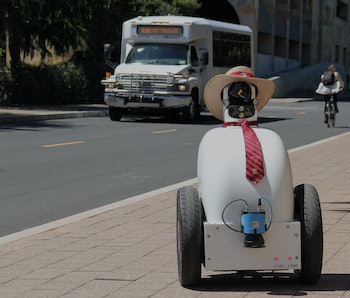 Companies like Tesla and Google are spending fortunes developing robotic cars that can understand and navigate the convoluted set of rules and social norms that govern our roads. Now, a team of Stanford researchers is designing a robot to tackle a potentially even trickier set of conventions: Life as a pedestrian.

Jackrabbot, named in honor of the jack rabbits that run around Stanford’s campus, may one day offer door-to-door delivery service, but for now is busy simply trying to walk down the street without getting kicked to the curb.

“We’re envisioning a new generation of robots which can operate alongside humans,” says Silvio Savarese, an assistant professor at Stanford who’s worked on the project. “For instance, in shopping malls, in train stations. In order to do so, social robots have to understand human conventions and human etiquette. We actually don’t have those rules written down. Our goal in this project is to actually learn those rules automatically from observations, by observing how humans behave in these social spaces. The idea is to transfer those rules into robots.”

Right now, that means students, professors, and visitors to Stanford’s campus are all inadvertent test subjects in Jackrabbot’s training. The robot swerves in and out of students hustling to class and researchers dreamily chatting about their own startup initiatives. Jackrabbot’s observations as well as its crashes during these training runs then form the basis of an algorithm that keeps it from repeating these mistakes in the future.

“Our goal in this project is to actually learn those (pedestrian) rules automatically from observations – by seeing how humans behave in these kinds of social spaces,” Savarese said. “The idea is to transfer those rules into robots.”

And one of the most important potential barriers for a robot contemplating life on the sidewalk is ensuring that it doesn’t creep everyone out. Most, if not all, robots designed to interact with people have been humanoid bots, designed to look like humans, but these researchers found that those machines can sometimes be the creepiest of all. So they decided to build a friendly “ball on wheels” that would attract more hugs than horror.

“We actually envision the idea of having robots that can be as loving and amicable as possible, and for that they don’t necessarily have to look like humans,” Savarese said.

These kind of navigable robots could displace drones as the most promising technology to challenge how we make local deliveries. Jackrabbot could also serve one day as the seeing-eye dogs of the future, though the present model would struggle going up stairs and, of course, even Stanford engineering will never manufacture a robot that is as friendly as a pooch.

The programming and machinery presently make the Jackrabbot prohibitively expensive, but the researchers are confident that in a few years, a more advanced model could sell for as little as $500. So even as everyone freaks out about the potential for drones and autonomous cars to change the world, it’s worth remembering engineers like these are cooking up entirely new ideas that may go beyond anything we can currently imagine.