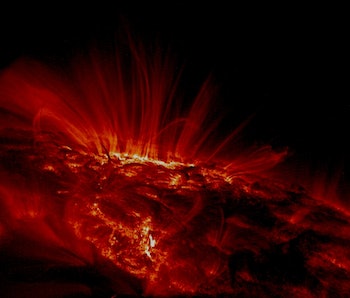 Relatively speaking, it doesn’t cost very much to study the sun.

The American Astronomical Society’s Solar Physics Division on Wednesday announced that four research projects take advantage of cheaper materials and technologies to study solar physics, and the kinds of observations these new tools have been able to make. All the projects are around observing x-rays and other kinds of signals produced during solar flares.

First and foremost is the Gamma-Ray Imager/Polarimeter for Solar flares, or GRIPS, a low-cost, suborbital platform that fits snugly in NASA’s push for inexpensive technologies for next-generation instrumentation. GRIPS arrived in Antarctica in late October 2015 and was launched into the air in January of this year for a long-duration flight over Antarctica. While 130,000 feet above the surface, the balloon-carried instrument picked up data on gamma rays that had arrived from the sun all the way to Earth. Even better was the fact that the 12 days GRIPS spent in the air were during antarctic summer, where there’s 24 hours of continuous sunlight.

Albert Shih, the GRIPS project manager based at the Goddard Space Flight Center, said that while a crew was able to go out and recover the data drive, the bulk of the actual GRIPS hardware “is still sitting in Antarctica, waiting for recovery.”

The Focusing Optics X-ray Solar Imager (FOXSI) payload, built by a team at the University of California, Berkeley is another project. Launched aboard an inexpensive sounding rocket, FOXSI the result of a collection of seven telescope modules used to observe hard x-ray signatures of solar flares. But it’s the way the mirrors are constructed and controlled that makes FOXSI such a useful optical tool.

Visible light has no problem bouncing off a mirror. X-rays, on the other hand, pass right through a mirror like nobody’s business. The key to is arrange those mirrors to optically focus the x-ray signals toward the sensor — in this case, that arrangement is based on Wolter geometry where a parabolic or elliptical mirror is followed by a hyperbolic one, in a tubular fashion. This offers a cleaner observation of the sun’s hard x-rays than previous instruments could. As explained by Juan Camilo Buitrago-Casas, a physics Ph.D student at UC Berkeley, the team has used the data to conclude the plasma emissions from the sun’s active region is 100 times less than originally thought.

FOXSI is set to fly for the third time in 2018. By looking at the hard x-rays, “we can observe even hot air in the atmosphere in the sun,” said Buitrago-Casas, and pick up clues about the more subtle details of the sun.

Another mission that uses Wolter geometry and focused optics to study solar x-rays is Nuclear Spectroscopic Telescope Array, or NuSTAR. This space-based telescope was originally designed to study faint energy signals emanating from distant stars, but has shown a knack for giving scientists a glimpse into frail happenings blowing up from the quieter regions of the sun. In fact, NuSTAR was responsible for finding the smallest solar flare ever observed on record. In short, it gives scientists a look at what’s happening to the sun with 100 teams more sensitivity than previous instruments.

Moveing forward, the NuSTAR team wants to work on a concept for a successor spacecraft that is fully dedicated to solar physics research, instead of just being an unintentionally opportune tool for studying the sun.

Finally, there’s the Miniature X-ray Solar Spectrometer, or MinXSS — a cubesat deployed from the International Space Station May 16. This newbie solar instrument is geared to study soft x-rays from the sun and give scientists a better understanding of solar flares, heating from the sun’s corona, and, “very importantly, the impact that the X-ray radiation from the sun has on Earth’s atmosphere,” said Amir Caspi, a research scientist with the Southwest Research Institute in Boulder, Colorado who’s working on the MinXSS project.

Caspi explained that soft x-rays can teach us about the hot plasma in solar flares coming from the suns active regions. This energy can have some considerable impact on the Earth’s upper atmospheric layers — especially the ionosphere, which is important to radio communications, and which can also affect power grids situated on the ground by creating coupling effects on the magnetosphere. In soft X-rays, different energies will penetrate different layers of the atmosphere” to create different energetic effects of the atmosphere, said Caspi. But soft x-rays are a very understudied source of fascination among astrophysics. There have only been sporadic observations made on soft solar x-rays — no routine studies.

MinXSS is looking to change that by hanging above the 400 kilometers above the surface of the Earth for the next six to 12 months and collecting as much data as it can about soft solar x-rays. As a cubesat, MinXSS is an incredibly cheap way to study solar activity. Moreover, there’s a citizen science component behind the mission, amateur ham radio operators can tune in to MinXSS and interact with the solar data directly.

While all of this is great for science’s sake, there are more important reasons for wanting to study the sun’s activity — namely, so we can anticipate when the sun is going to start spewing out some gnarly shit, and prepare ourselves so we can safeguard our essential technologies from damage or outright destruction. If a solar storm breaks out that’s powerful enough to render all our electrical equipment on Earth and up in orbit inoperable, we’re basically looking at having to relegate ourselves to life as it was there centuries ago.

I, for one, am not going to back to a world without the internet.