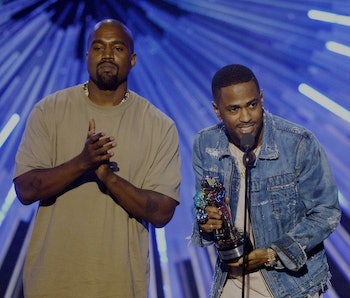 Kanye West may be up to something, but when isn’t he? This week, ‘Ye was seen in the studio with Big Sean, via Snapchat, getting hyped off his own rhymes (which include “Yeezy might have to go and put his Louis on” and “Pray for me, I’m about to hit the Ye button/ I don’t want say nothing wrong”). The sessions could be for Big Sean’s Dark Paradise follow-up, which he’s currently working on, but, of course, Fonzworth Bentley had to come and revive our hope — and rumors — of a G.O.O.D. Music compilation, Cruel Winter. Bentley took to Instagram to post a photo of the same session with the cruel yet hope-inducing caption: #CruelWinter

When Q-Tip left us hanging on a question

How it all started: When asked about his absence on Cruel Summer, Q-Tip answered with a question — a very unfair question: “If there’s a Cruel Summer, then there’s got to be a Cruel Winter, right?”

While walking down the red carpet at the 2013 BET Awards, Travis Scott told MTV News that Ye still go all the way hard about Cruel Winter, so you just never know…He might just drop that shit out of nowhere, man.” The final dagger was when Scott continued to say, “Until I hear ‘Ye be like, ‘It’s not coming out,’ then that’s when I can say it’s not coming out.”

Scott at it again

During an interview with Semtex in 2013, Scott claimed the first single off Cruel Winter would be a collaborative song with him and ‘Ye titled “I Got Bands.” “It’s the first single off Cruel Winter. Kanye seen a vision for that shit and we just applied it and made it happen,” he said. (“I Got Bands” was featured on Scott’s EP Owl Pharaoh, as “Bandz” which features Kanye West and Meek Mill.)

Travis Scott had people talking about Cruel Winter last year when he posted an illustration of him and Kanye West on Instagram with the caption, “We got something we been plotting for years now that’s about to surface.”

Push T and Common were kind enough to kill the rumors, putting a lot of us out of own self-inflected misery but it’s safe to assume that now, after this week, ‘Ye can be the only one who can kill Cruel Winter dreams, or better yet, make them come true.

More like this
Mind and Body
17 hours ago
How music makes you feel may depend less on your brain than scientists once thought — study
By Allison Parshall
Entertainment
19 hours ago
Guardians of the Galaxy vol. 3 leak reveals one MCU hero's happy ending
By Alex Welch
Entertainment
20 hours ago
Harley Quinn Season 3 could fix a major Batman controversy, trailer hints
By Eric Francisco
Share: