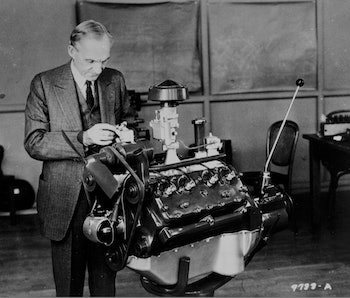 For better or worse, Henry Ford’s innovations in the field of automobile manufacturing and capitalism made him one of the most influential American figures of the 20th century. But big successes tend to come only after big failures, and Ford’s life was rife with them. Some were the sort of failures that lead to better ideas down the road, others were bad ideas that failed predictably, and many were the result of Ford being a xenophobic prick. Remembering this is crucial, because it’s so easy to lionize innovators for their successes while only alluding to their failures in passing. Failures are the bulk of Ford’s legitimately impressive legacy.

In our age of innovation, it’s all the more important to understand that “great men” like Ford often have significant technical and emotional blindspots. Looking to disruptors for social guidance is fine, but as Ford proved by spending the latter half of his life as a moral dumpster fire: brilliance is a thing that happens, not a trait some humans possess.

Ford’s first foray into automobile manufacturing was an abject failure by most measures. His original Quadricycle – basically a frame, an ethanol engine, and four bicycle wheels – was far too complicated to be mass-produced, and even in its most perfected form had major mechanical issues.

Though the Quadricycle was a failed attempt at automobile production, it may have been the best thing that ever happened to Ford because it got him out of Thomas Edison’s shadow, got him some name recognition, and managed to put him in touch with the money men who ultimately bankrolled the Detroit Auto Company, which became the Ford Motor Company in 1903.

For all of Henry Ford’s truly great ideas, perhaps the one he receives the least amount of credit for is the charcoal briquette. As it turns out, Ford and a group of his rich friends (who called themselves the Vagabonds) frequently got together for rich-guy outdoor high jinks. On one such trip, Ford and the husband of a cousin brainstormed ways to turn a profit on the waste from one of Ford’s manufacturing plants. Surely there had to be some use for tons and tons of scrap wood, after all.

With the help of a University of Oregon chemist named Orin Stafford, Ford built a factory where sawdust, waste from his manufacturing plants, tar, and cornstarch would be converted into square lumps of fuel. While Ford was on the right track from a invention standpoint, he took a wrong turn in marketing. Ford though that the average American would love to emulate the outdoor-cooking style of his fellow Vagabonds and started selling “picnic kits” (portable barbecue grills with plenty of Ford briquettes).

As prescient as Ford’s vision of outdoor-cooking-as-a-leisure-activity was, timing is everything. During the Great Depression, it took someone singularly tone deaf to market luxury picnic kits. It was no secret that Ford and his Vagabonds travelled with a full staff of cooks and waiters, so by dangling such extravagance in the face of American families struggling to put food in their children’s mouths, Ford found himself an object of public derision. It was for that reason, Ford renamed his briquettes after his cousin, Edward G. Kingsford.

As it turns out, producing hundreds of thousands of cars required millions of tires. By 1920, there was already an established rubber monopoly run by Dutch and English aristocrats who had smuggled rubber trees out of South America and established massive plantations in East Asia. Ford was not a man to waste a dollar, and certainly not a man who liked to be taken advantage of, so he sought to single-handedly bust the rubber monopoly. To do this, he established Fordlandia, the largest rubber plantation on the planet, located in the heart of the Amazon rain forest.

Fordlandia was pretty much doomed from the start: The 25,000 kilometers of rainforest Ford bought just so happened to be owned by the same agent he enlisted to help find suitable land. Most of the land was rocky, hilly, and unsuitable for any sort of agricultural production. To make matters worse, at that time, rubber could only be extracted from a particular type of tree, yet Ford sent a team of engineers who had no experience with botany, biology, or tropical agriculture. Project managers planted the wrong trees, too close to each other, and on land with soil that was completely unsuitable.

His team didn’t have the skills needed to farm the trees necessary to produce the rubber, and they also completely underestimated the cultural differences. Fordlandia was basically a mini-suburb of Detroit located in the middle of the Amazon. And while they were paid relatively well, workers balked at the strange demands of their new bosses, who expected them to work through the hottest part of the day, abstain from alcohol, and “Americanize” their diets.

With the trees already not growing, an infestation of bugs decimated the food supplies, and malaria broke out in the workers’ camp. It took the Brazilian military weeks to get the camp back under control. By the time Ford management was able to return to Fordlandia, many of the factories had been vandalized, much of the equipment had been damaged or stolen, and even some of their former homes had been completely burned down. Ford kept the Fordlandia experiment going for another three years, even investing in a second plantation. At the end of it all Ford’s failure in Brazil cost the company an estimated $200 million in today’s dollars.

Henry Ford never stopped looking to diversify. One of his lifelong goals was to find a way to pair agriculture and manufacturing. To that end, he sought to find a way to produce cars out of organic material like soybean, from which he thought could be make a type of plastic.

There is no shortage of controversy surrounding the soybean car and whether or not any of the plastic panels were derived from actual soybeans. The pro-Ford camp seems content to believe that the system worked, but there are plenty of skeptics unwilling to take Ford’s word for it. The theory goes that Ford, wanting to save face after failing to create heavy-duty plastic from soy beans — something we still can’t do — instructed engineers to build a prototype from a phenolic plastic like Bakelite, briefly put it on display, then get rid of it until people eventually forgot.

Either either way, the outbreak of World War II led to the project being shelved and ultimately forgotten.

If you talk to some Ford fans, Henry Ford’s decision to raise his worker’s pay to $5 a day was born out of a prescient desire to single-handedly create a happy, healthy, blue collar middle-class in America. In truth, it was a matter of supply and demand: He was having a hard time keeping workers. Even by 1913 standards, assembly line work was kind of a shit gig. Employees on Ford’s assembly lines were already making $2.25 a day and the turnover was massive. In one calendar year, Ford hired over 52,000 people to fill less than 14,000 positions.

Even if you agree the raise was good for workers, there is a dark underbelly to Ford’s new “living wage.” The new contract had several caveats based on Ford’s own questionable moral code.

To receive the new wage, employees were expected to avoid social ills like gambling, drinking, and general carousing. Meanwhile, immigrant workers had to sign a pledge promising to assimilate to the American way of life, which included committing to learning English and attending Ford-sponsored “Americanization” classes. Women could only receive the wage if they were widowed or single, and their family’s sole breadwinner (so long as that family didn’t include children born out of wedlock). Meanwhile, male workers forfeited the higher pay scale if they had a wife who worked outside the home.

To enforce the new requirements, Ford even created a new corporate branch called the Socialization Organization. The new department was tasked with monitoring employees on the $5 per day pay scale, literally sending agents to the homes of employees for random “character checkups”. Even at the time, Ford’s own corporate bureau of investigation freaked people out. Many employees quit in spite of the pay raise over what they saw as a massive violation of their privacy. Others accused Ford of using his morality bureau as front for union busting.

Of all the Henry Ford fails, his worst was a personal failing — he was a raging anti-semite and literal Nazi hero. Ford would regularly rant to anyone who would listen about “the Jew and Jewish capitalists,” published the first copies of Protocols of the Elders of Zion in America, and even purchased a newspaper, The Dearborn Independent, to further a web of super nasty conspiracy theories that blamed Jews for everything from the World War I to inflated rubber prices. The Independent eventually folded racism of other stripes into the anti-semitism, and became one of the most widely read right-wing nationalist papers in the nation.

Henry Ford was such an avid anti-semite he literally won awards from Nazis. In 1938, Ford even received the Grand Cross of the German Eagle. Now Ford defenders will say that the Germans, being all German and stuff, were simply impressed by his technical aptitude and modernization of the manufacturing process. And while there may be some truth to it, Ford was the only American mentioned by name in Hitler’s Mein Kampf and it was rumored the German dictator kept a photo of Ford on his desk, inspired by Ford’s commitment to “educating” Americans and Europeans on the evils of “the Jew.”