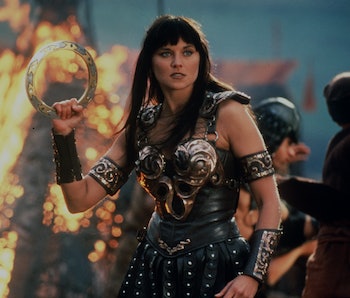 Welcome to Childhood Fact Check, where we revisit (and maybe ruin) our childhood faves. I’ve spent the last week rewatching season one of Xena: Warrior Princess, to let you know how it holds up.

I was an avid Xena watcher for a few seasons in elementary school. She was the most badass lady on TV at the time so, naturally, that was the draw. Ultimately I have no concept of what the plot was other than “action and adventure’, but Xena rode a horse and had a sword which were the top metrics of badassery so what more do you need? I was definitely oblivious to the homoerotic undertones.

Okay, so the plot is that Xena used to be a villain but now she’s on a quest for redemption, fighting for good. Gabrielle is the first innocent whom she rescues, and the chatty blonde farm girl is instantly enamored. She is determined to join Xena on her adventures. Other than that, it’s pretty episodic problem-fight scene-resolution storytelling.

The development of Xena and Gabrielle’s friendship, and Gabrielle’s burgeoning bravery are the real ongoing plot arc. Xena doesn’t always take kindly to her, and Gabrielle is responsible for some of their early predicaments by blithely wandering into…just about everything. In episode 7, she wanders into a creepy occult ceremony and accidentally frees the Titans (and they have some love triangle drama going on). But Gabrielle gradually starts to hold her own and helps rescue Xena as often as she herself needs rescuing.

By episode 3, Xena and Gabrielle have a conversation about boobs and I totally understand why everyone thought they were gay for each other.

Every villain in this show is an ultimate fuckboy and they all have some degree of a boner for Xena. “Better?” Ares mouthbreathes as he gives Xena a shoulder rub, then tries to seduce her back into her old evil ways. “Danger excites you. And I am… somewhat dangerous,” he rasps.

Later Xena pretends to accept his deal, but really you know she’s scheming something fierce. “See you later then,” she croons. Mic drop.

Gabrielle, on the other hand, attracts every babyfaced pacifist and disappointment-to-his-father guy, but it’s sweet.

Even in the first season, the connection to ancient Greece is a bit tenuous. The setting is a more ambiguous time period when everyone had swords and there were peasants, sprinkled with an occasional figure from Greek mythology.

Xena is still one of the baddest bitches (in the good way) to ever grace our screens. It’s sad considering how much time has passed, but it does mean she’s hella fun to watch. Everything, from the costumes to the dialogue to the fight choreography is super cheesy. Xena was like a warrior MacGyver of fight moves. It’s expected, and was actually a big part of the enjoyment. Since Xena was not specifically targeted at children, it’s more ‘90s TV nostalgia than a childhood nostalgia.

If Gwendoline Christie is not involved in the reboot (Kristofer Hivju as Ares perhaps?) it will be a small crime.

Should an adult rewatch this? Yeah, it’s still fun. An episode or two is enough – unless you were a super fan – but the good news is there’s no need to watch them in order, so pick any one you like.

What if that adult is drunk? Hell yeah, preferable actually.