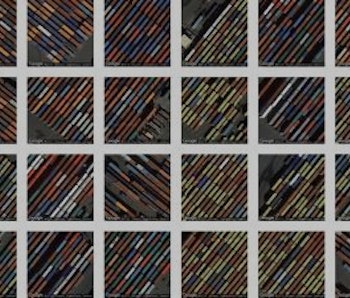 A new program called Terrapattern searches satellite images of certain regions to find visually similar features. All you have to do is pick out a small slice of an area, like a baseball field, piers on the water, or a group of parked school buses, and Terrapattern returns any areas that look the same. Currently only available for Pittsburgh, San Francisco, New York, and Detroit, the program’s goal is to develop technology that makes scouring the massive quantity of satellite photos of earth that are coming in every day more reasonable.

Call it big data for satellite images or a harbinger of a potentially intrusive new way of life, Terrapattern is certainly an excellent way to waste time on the internet. Cities like New York often appear unknowably large, but suddenly we have the ability to scan it for similar features, as if we were “Control-F” searching a document for common words. Whether you’re a data scientist, citizen journalist, or just a curious browser, Terrapattern doesn’t get boring quickly, with a database the size of some of the greatest American cities. And the best part is that it’s arriving just in time.

“It has been predicted that, within the next three years, access to daily-updated, whole-earth satellite imagery with sub-meter resolution will become widely available online,” Terrapattern’s website reads. “We are particularly keen to help people identify, characterize and track indicators which have not been detected or measured previously, and which have sociological, humanitarian, scientific, or cultural significance.”

A journalist could gather a sense of a region’s economic vitality by scanning shipping containers over a period of time and checking whether they are growing or shrinking in number. A watchdog can better keep an eye on a city’s huge number of bridges, keeping an eye out for obvious signs of decays without ever leaving their couch. Or a politician, who feels their neighborhood has too few parks, can study the issue on Terrapattern and get real data to back up their assertions.

The profusion of satellite imagery that will be arriving in the coming years will only enhance these capabilities, and undoubtedly new and less reputable ideas for how to manage such a powerful tool will emerge as well. “Sub-meter” satellite resolution is a pretty powerful force, and while a single satellite snapshot of someone’s home may not feel too invasive, if that photo is updated on a daily basis, people may start to balk at giving permission.

Google Street View remains controversial around the world, with several European countries having banned the service on the basis of laws that prohibit filming someone without their permission. As everyone on the internet knows, the Street View car has amassed troves of private moments, including sun bathers, amorous couples, drug deals, lots of people peeing, as well as thousands of the strange, bizarre, and inexplicable events that occur on world streets every day. Terrapattern wants to make it easier to search for similarities across these images, but it can be hard to separate acceptable and inappropriate uses of such a platform.

It’s a sign of Terrapattern’s potential (and addictiveness) that it’s only been active a few days, and #Terrapattern already returns dozens of entrancing photos of city scenes in harmony on Twitter. Be sure to check it out, but beware you may be sacrificing your productivity for a week or two.