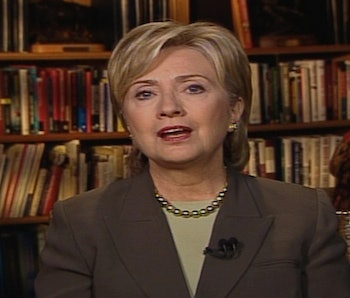 Hillary Clinton’s history with violent video games is gaining renewed attention as a video of the then-senator arguing for age regulations has resurfaced on a popular Reddit community.

Posted on /r/Gaming, which boasts some 10 million subscribers, the video — with the headline:

“Hillary Clinton says ‘violent’ video games proven to cause violence in people. Demands they be regulated like alcohol and tobacco.”

The post sat at the top of the subreddit on Thursday morning.

In the video, Clinton argues that children playing violent and sexually explicit video games display “increased aggression.” While violent video games have never been found to induce violence in children, the connection to greater aggression and decreased displays of empathy is well-established.

“Many games contain content that is deeply disturbing,” Clinton says in the video. “It is almost routine in popular games for players to spray other people with Uzis, to drive over pedestrians, to kill police officers, to attack women. In some cases, even to engage in cannibalism.”

“But we have 40 years of research to tell us that violent media is bad for our children,” Clinton continues. “According to the most comprehensive, statistical analysis yet conducted, video games increase aggressive behavior as much as lead exposure decreases children’s IQ scores.”

“Yes, I played Kerbal space program, and now I am head of NASA,” one user comments.

“Can confirm. I played goat simulator. Am now a goat,” another replied.

A few other replies suggested that Clinton did not actually care about video games but simply believed the issue appealed to so-called “value voters,” as she was preparing for her 2008 presidential bid.

Clinton’s efforts to regulate children’s access to video games also does belie a longer history as an actual player. According to an Instagram photo posted by the William Jefferson Clinton Presidential Library of then-First Lady Hillary Clinton playing an early Gameboy, Hillary Clinton picked up the habit while taking care of her ailing father in the weeks before his death.