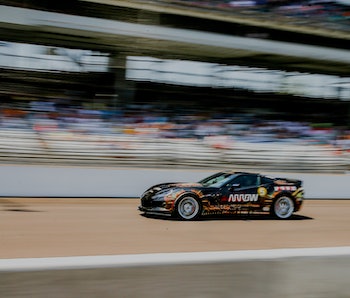 Sam Schmidt wasn’t one of the official drivers at yesterday’s 100th Indianapolis 500, but his speed record is still notable.

Schmidt, a former IndyCar driver, has been a quadriplegic since a racing accident in 2000. Thanks to semi-autonomous, open-sourced vehicle technology designed by Arrow Electronics, he was able to drive a Corvette Z06 around the famous Indy track at 152 mph in between the race’s qualifying laps.

“Arrow’s objective with the SAM (semi-autonomous motorcar) is to enable disabled drivers to enjoy the driving experience again by leveraging the power of technology,” Joe Verrengia, Arrow’s social responsibility director, tells Inverse. “Sam Schmidt is, and always will be, a race car driver, so we wanted to build him a car that would go fast — helping him recapture the unique thrill of racing.”

A lot has changed since Arrow started developing a car Schmidt could drive back in 2013. Nearly every car company now has a laser focus on developing autonomous vehicles to increase mobility by giving vehicle control up to technology. But Arrow aims to do something different: give control of technology to people.

Schmidt controlled the Corvette using only his head. He accelerated to 152 mph by blowing into a tube, which signaled the “sip-and-puff” computer to speed up, and then inhaled to initiate the brakes. Infrared cameras followed Schmidt’s head movements inside the vehicle, and when he turned his head the car turned with him. Arrow’s Connect IoT platform connected engineers to the nuances of each motion in real time and allowed Sam and his co-driver Robby Unser to immediately fix anything that went wrong.

A GPS system could warn Schmidt if he got too close to the edge of the track, and would drift the car back toward the center if the car got too far off course.

Driving around a race track at high speeds obviously isn’t a top priority for many people. Just as Schmidt was in control of the car, though, the public is in control of what comes next for the car’s software and technology.

The software “has promising humanitarian applications off the track, such as control of wheelchairs and robotic devices,” Verrengia says. “We hope innovators will look for such new applications.”

More like this
Innovation
8.8.2022 10:00 AM
A wild new plane-train hybrid could whoosh you to your destination — if it can get off the ground
By Molly Glick
Innovation
22 hours ago
Want to buy an EV? Here’s what you need to know about the Inflation Reduction Act
By James Morton Turner and The Conversation
Innovation
22 hours ago
Electric vehicles could transform U.S. cities — but not for the reason you think
By Erica D. Walker and The Conversation
Share: